Jerrod Fasan is an American first-time novelist who obtained his associates in English from Borough of Manhattan Community College and then obtained his bachelors in English from Brooklyn College. With a love for all genres, he first tackled the area of crime and mystery because of his fascination with the details he could offer to his readers. Trickling Sands, a ‘who done it’ novella is a milestone for Fasan as he takes the readers onto an entirely different path and into a creepy-surreal darkness to search for a killer. His goal is to continue to write and bring page-turning stories to readers that will not only inspire but also captivate them.

“With a swift economy of narration and plot, Fasan’s tale speeds its way through the classic machinations of a police procedural with a few spiritual additions tossed in.”
– Kirkus Reviews 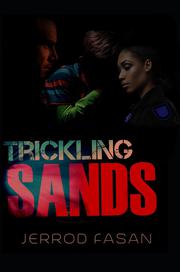 A debut thriller focuses on a detective investigating his best friend’s murder.

Fasan’s adventuresome tale features two 30-something sleuths, both married with children, whose lives are upended when the unexpected happens. After a relatively tame night out at a bar after work, fellow Welder Ville police detectives and best friends Richard and Garett return to their respective spouses. Richard goes home to his wife, Serene, and 6-year-old son, Mark. Garett returns to his wife, Nadine, and their three kids. What follows is every parent’s worst nightmare: Richard awakes the next morning in a daze to discover his son missing, nowhere to be found in the house or elsewhere. When Garett’s best buddy doesn’t show up for work at the precinct, he drives to Richard’s house in a panic and discovers a young boy cowering in a dark corner of the basement. Mark hears the oblivious spirits of his parents drifting around the house. The author adds suspense early on in the novel by inserting young Mark’s terrified perspective into the story. His parents have become specters, but they are unaware of their own deaths. They have not yet figured out that they died by gunshot in their bed, and start searching for Mark. The double homicide rocks the local police district. Garett and a team of investigators are immediately on the case, examining Richard’s service pistol, which was the murder weapon, sparking a hunch that makes Mark a possible suspect in the deaths of his parents. As the killings cut so close to home at the precinct, Richard’s and Serene’s murders are made a top priority. The fast-tracked probe circles around Serene’s troubled family, specifically Richard’s brother-in-law, Haden.

With a swift economy of narration and plot, Fasan’s tale speeds its way through the classic machinations of a police procedural with a few spiritual additions tossed in, such as Garett’s seeing his dead partner in a dream state in which he is able to say goodbye personally. There’s also a good amount of twists for such a slim, smooth mystery. The list of suspects is short, but readers won’t really know who the killer is until late in the story, which is an impressive feat for a first-time author. There’s also a feel-good ending that somewhat rectifies the crimes the tale sets out to solve. The story’s biggest hindrance is its brief length: The book feels like the beginning of a bigger work to come and concludes just as readers will be warming to Fasan’s good-natured characters. Overall, the work suffers from sections of awkward phrasing and unnecessary exposition. There is also a palpable feeling of underdevelopment throughout. Even while the core tale is memorable and dramatic, readers may be left wanting further, more in-depth, and less rushed character and plot development. Nevertheless, though the case resolution does arrive in a somewhat hurried fashion, readers looking for a quick whodunit with vigorous, believable, if stunted, characterization and relatively little gore will devour this compact suspense tale about the sudden, horrific homicide of a loving couple and the grief of a son.

A slender, potent slice of crime fiction; creatively inspired yet a bit undeveloped.