Emilia Ares is an Armenian-American actress best known for American Horror Story and Bosch, producer and author of Love and Other Sins. Emilia graduated from the University of California, Los Angeles with her Bachelor’s in Economics and a Minor in Russian. Literature and storytelling have always been her true passion. 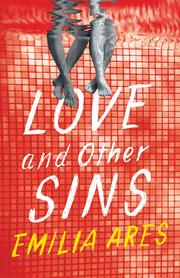 LOVE AND OTHER SINS

In this debut YA novel, two misfit teenagers navigate a romantic relationship and face down painful legacies.

Mina Nikolaevna Arkova, the 17-year-old daughter of Soviet immigrants, has never quite fit in; other kids “never seemed to recognize me as one of their own species.” For her senior year of high school, she’s transferring from a tony private school to a grittier, less expensive one in Hollywood. Saving money is important ever since her mother lost one of her jobs and her father took off. Mina plans on earning stellar grades, going to a top-flight university, and becoming a lawyer, although her real love is dancing. Oliver Mondell, 17, has chosen this new name as part of his new life. As a foster child and survivor of sexual abuse, he has excellent reasons for putting his miserable past behind him. Now, he’s moving to Los Angeles, finishing high school, and developing his lucrative business buying and selling smartphones. When Mina and Oliver meet, they share a strong attraction, but their personal issues create a push-pull dynamic that complicates coming to each other’s emotional rescue. Just as they reach an understanding, violence erupts in Mina’s life, the story to continue in a second installment. In her novel, Ares displays a gift for capturing the complex inner lives of teenagers through Mina’s and Oliver’s alternating first-person chapters. They’re authentically slang-y and teenage-lusty; they struggle with believable, significant internal and external conflicts; and they’re thoughtful about fate, the future, and each other. Other characters, too, are well drawn, such as Mina’s overreacting but endearing mother: “All I wishing is for you to be safe and not to killing my nerves anymore.” Structurally, the book is slow to develop and then ends on a cliffhanger—an unsatisfying combination.

A well-written and emotionally involving teen tale with fine characterization but an unresolved ending.

Love and Other Sins clip

In the Wild Light