Peri Scott is a Canadian Author, Musician, and Entrepreneur. He has been studying business, finance, psychology, and self-improvement for many years and loves to "talk money" with people who need help figuring out the inner workings of wealth. He shares his thoughts through a weekly blog, books, courses and in-person consulting.

He lives in Calgary, Canada with his wife and 2 dogs.

“An earnest but rather lightweight critique of contemporary capitalism”
– Kirkus Reviews 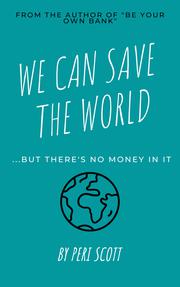 WE CAN SAVE THE WORLD

The author writes that he knows a lot about how the economy works, but he hasn’t been able to turn that knowledge into riches—and he notes that it’s easy, under such circumstances, to wonder if the system is operating correctly. “In a world that has…so much knowledge stockpiled in libraries, the internet and book stores,” asks Scott in his introduction, “how come everyone I know, including myself, are usually thrust into a life of constant struggle and strife?” To answer this question, the author delves into the ways that capitalism actually functions: how we all participate in it, benefit from it, and are victimized by it. He discusses how changes in corporate culture and shortsighted consumption habits have contributed to creating a society of haves and have-nots. Scott then explores some alternative economic systems while also suggesting changes that might make capitalism more equitable and sustainable; he calls this hypothetical reboot “Tempered Capitalism.” Overall, Scott’s prose is conversational and easy to follow, as when he discusses the advantages of life in a growing community of people who live in vans: “The sense of freedom, self-efficacy and sovereignty that they experience is worth any of the hardships they encounter. Imagine that. We live in a country that is considered ‘free’, yet people are starving for the actual experience of freedom.” However, the book is very brief considering the weightiness of its subject—less than 100 pages—and relies heavily on the ideas of others, including systems scientist Riane Eisler, author of The Chalice and the Blade (1987). The solutions that Scott comes to are also fairly long-term and difficult to enact, to say the least—one of them, for instance, is the establishment of a united world government. Readers will likely agree with much of what the author says about the inequalities of the current global economic system, but his ideas aren’t much more specific or original than one might hear in a gathering of college students.

An earnest but rather lightweight critique of contemporary capitalism.

BYOB: Be Your Own Bank

How To Invest Like the Rich A “Do It Yourself” approach to Investing and Passive Income Learn how to Create Cash Flow Learn how and why “Cash Flow is KING” You will have a new focus on generating passive income. You can invest much more than you thought possible – without sacrifice. Real Estate is great.. IF you already have money. Find out how to use time-honored real estate investing techniques to your advantage, without the headaches! Be Your Own Bank means you are in control. YOU reap the rewards, and YOU are the MASTER.
Published: May 11, 2019
ISBN: 978-1-9991137-0-4

Invest In Yourself: Being Your Own Bank

Bringing more “Power to the People” Expanding on the ideas presented in his best-selling book, “BYOB: Be Your Own Bank”, Peri Scott goes even deeper into the philosophy and practical applications of thinking like the rich. If you are longing to escape the 9-5 or are worried about how you are going to retire someday, the ideas put forth in this book are designed to help everyday people become financially free through unconventional money movement strategies. This is not “Save 10% of your income for 50 years and hopefully retire”. This is fast. This is simple. This is no longer putting your future into the hands of other people. You are now in charge. Perhaps you need only ONE idea, said in the right way, to start the fire within you, and inspire you to take control of your financial future and begin your journey to true freedom.
Published: Oct. 17, 2019
ISBN: 978-1-9991137-1-1

What I Wish I Knew About Money

Money 101 Things you should know about money Learn the things I wish I had known when I was thrust into the capitalist world. So many people enter the workplace sadly under-prepared to deal with money and finances. There are so many really cool ways to build wealth, but they all require you to know some basic things first. In this book I explain: How to Prioritize Your Spending- You need to focus your spending on the right things. How to Deal with Emotions- Money is a very harsh emotional trigger for many people. I explain how to overcome the negative feelings and worry that thinking about money can create. How to Shop for a Car- I examine whether to buy used or new - using simple math to make the decision clear. How People REALLY Create Wealth- People have a very distorted idea about how to create wealth and abundance. It’s time you learned the truth. You will have a solid foundation of knowledge that I believe will give you an advantage in your quest to gain financial freedom.
Published: Dec. 17, 2019
ISBN: 978-1-9991137-3-5