Chris McClelland spent his early childhood in New York and southern Georgia, before moving to central Florida in 1975. He studied engineering at the University of Florida, and holds a BA and an MA in English from the University of Central Florida. He spent seven years teaching as an adjunct professor at various colleges around central Florida. In 1999, he was a contributor to the Bread Loaf Writer’s Conference. He later won the Florida Literary Arts Alliance Award for Short Fiction for his story, "Fine People." At that time he worked as a technical writer for Siemens Westinghouse. In 2004 he became a regular contributor to Narrative Magazine where he worked as an assistant editor. His nonfiction writing has appeared in Harper’s, Puerto Del Sol, and Mid-American Review. He is a member in good standing in the Church of Jesus Christ of Latter Day Saints (Mormons). He recently co-edited The Provo Canyon Review with his wife, Erin. They live in Orem, Utah with their two sons. His novel, In Love and War, has been published to many positive reviews. Since then, he has also published a novella and a short story collection.

“A sharp, moving reflection on how love can survive even the greatest trials.”
– Kirkus Reviews 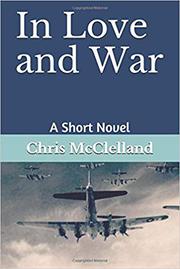 IN LOVE AND WAR

A debut drama, set before and during World War II, which explores the distinction between friend and foe.

Mack McInnis meets Inga Kaufener in Florida in 1933, when they’re both 10 years old, and their friendship blossoms into romance in their senior year of high school. Inga’s German family had moved to America to escape the consequences of Hitler’s rise to power, but as the possibility of war between Germany and the United States becomes increasingly likely, she encounters scorn and distrust from her peers. In 1941, when American involvement in the war seems inevitable, Inga’s father, Juergen, discovers that he’s suspected of being a German spy. He decides to move his family back to their homeland in order to ensure their safety. In Inga’s absence, heartsick Mack listlessly sleepwalks through his college experience, finally dropping out to retreat to a cabin in the woods and suffer in solitude. When he’s drafted, he insists on not fighting Germans, but because he has experience piloting crop dusters, he’s assigned to a B-17 that’s tasked with bombing German sites—including Weimar, where he knows that Inga currently lives. Meanwhile, Inga realizes that she’s pregnant with Mack’s child and marries a local boy in order to save her family from dishonor. Even though her brother was conscripted to fight in the German military, she secretly works for the resistance movement opposing Adolf Hitler. Author McClelland deftly follows several characters whose lives are involuntarily turned upside down by war and who are compelled to fight. He provocatively raises profound questions about how one defines and compartmentalizes allies and enemies and the ways in which duty forces one to make difficult decisions. For such a short novel, however, there are too many parallel subplots; for example, Mack’s father’s battle with lung cancer is a needless digression that doesn’t do anything to illuminate the story’s main themes. Still, McClelland’s unembellished prose is confident and self-assured throughout, and the subject matter is as philosophically challenging as it is emotionally poignant.

A sharp, moving reflection on how love can survive even the greatest trials.

In Love and War

McClelland, “Under Old Glory: A Novella of War, Love, and Faith” (Reviewed by Conor Hilton), 2021

Swimming Among the Olympians

From the award-winning short story writer Chris McClelland comes a new collection of short and powerful tales. They are wide ranging and feature intense dramatic situations and engaging characters. From historical fiction and romantic short story genres to his unique literary style stories, McClelland is developing an ever increasing and international audience. With his associations to Narrative Magazine and literary magazines like Puerto Del Sol and Mid-American Review, McClelland's has long been a respected voice in the American literary community. “The journey is always insightful, surprising, and deeply felt, and the reader always knows he is in good hands with Chris McClelland.”—Joe David Bellamy, Editors’ Book Award Winner
Published: Jan. 1, 2020
ISBN: ? B09DYSJ3S8

Mormon brothers Hyrum and Bill from Provo, Utah, join the US Army in 1918 looking for glory and adventure. Bill is an observer in a fighter plane, while Hyrum serves in the infantry. While wounded, Hyrum makes friends with a British war widow, and later, after being severely wounded, is nursed by his friend's sister, a recent covert to the LDS faith who heals him spiritually as well. The battles rage dangerous and deadly. Will the brothers make it back to Provo? Only time will tell.
Published: Jan. 1, 2019
ISBN: ? 1091849838