Mack was born in Conyers, Georgia. She studied International Politics in Seville, Spain. She lived, several years in Germany. Her studies and service in the Army have taken her all over the U.S. She travels to Europe regularly for research. Mack is currently on the Board of Directors of the Houston Writer’s Guild. “Progenie” is her first novel.

After leaving the Army, Mack worked as a medical librarian and an adjunct professor at Texas Woman’s University. Mack has authored and co-authored several articles for professional journals such as the Journal of the Medical Library Association, Medical Research Services Quarterly, and the Journal of Electronic Resources. She has presented at the Medical Library Association Conference, the Texas Gulf Coast Healthy Communities Partnership, and the Special Libraries Association Conference. She co-authored the book, Disaster Planning: a How-to-do-it manual, published by Neal-Schuman Publishers in 2005. Mack performs occasionally in Community Theater.

“Mack grew up in a rural and small, close-knit community in the Deep south. Growing up in such a way and in such a place provided a spring of experiences that inspire rich stories with a discernable Southern Gothic edge.”
– Kirkus Reviews 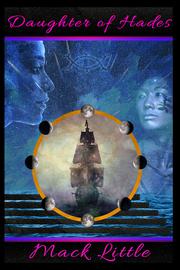 A Barbadian fugitive joins a pirate crew in this historical romance.

It’s the dawn of the age of piracy. Dinny Obosi has grown up an enslaved person on a Barbados plantation, the daughter of a Black man and an Irishwoman. Seeing the way the master, Owen Craig, looks at her, Dinny’s father arranges for her and her twin brother, Jimmie, to escape to Jamaica aboard a pirate ship—though not quickly enough to save her from a traumatic rape. With the help of a Chinese-born sailor named Lei, the twins board the ship Hades. Lei is infatuated with Dinny at first sight, and she is likewise ensnared by the mysterious seaman and his not-so-humble origins: “Lei’s comeliness moved her in the way a sunset might, one with colors and patterns she had never seen before. Every aspect of him entranced her. His eyes, so lovely—of course, she had seen striking eyes before, but none seemed to really see her.” Meanwhile, in Jamaica, Dinny’s cousin Ami is haunted by the ghostly vision of a Huguenot family facing persecution in France. The family turns out to be a real one, and the two surviving brothers, Ivan and Pax Durfort, are in the process of indenturing themselves as servants to a captain in order to win passage to the Caribbean, where they will crash right into the Obosi family’s destiny. When Lei and the other pirates—who consider Dinny to be a “daughter to the Hades” and therefore under their protection—launch a vendetta against Owen, they awaken the wrath of the man’s father, the powerful Adm. David Craig. Dinny takes to the pirate life—and the pirate prince that rescued her—but can she survive in such a dangerous line of work? As she and the crew of the Hades make their way across the Caribbean, they discover a powder keg of enslaved people, indentured servants, maroons, and outlaws waiting to explode.

In this series opener, Little delivers in terms of high-seas adventure, evoking the period and settings with her detailed prose: “Sugarcane-mantled hills rose and fell beneath the clear night sky as the moon neared the end of its journey in the western sky. Dinny, Lei, and Jimmie paused after reassuring themselves that they had lost the slave catchers. They stood at the top edge of a sloping terrace overlooking the coastal plains.” While the rhythms of the plot will be familiar to readers of historical romance novels, the main characters—and Lei, in particular—are original in ways that set them apart from the standard figures that populate the genre. Part of it is the diversity of backgrounds: The author deftly foregrounds the ways race, class, gender, and sexual orientation operate in the time period. Events of the plot sometimes feel contrived, and the sex scenes are often a bit over-the-top—even for such a romantic environment—but the book is generally immersive and entertaining. Readers looking for a pirate-based romance featuring a more diverse set of characters will likely enjoy this offering and look forward to the sequel.

An engaging, swashbuckling tale of love and revenge during the age of piracy.

The disappearance NIKAULE has upset the balance of the Breed society. She is a scion who holds the power to enslave the entire race of Djinn. JOSEPH, the first scion and an outcast, knows that the key to finding her lies in finding the identity of ZENOBIA GRANT, who is a doppelgänger for Nikaule. Zenobia is a 23-year-old, second-year medical resident with preternatural abilities. She knows she’s not human, not completely. She wants to know what she is, but her father, SAMUEL, fiercely protects her from the truth. As she struggles to find her true nature, Zen turns to an old book that her grandmother gave her for comfort. THADDEUS, is an ancient scion who stalks Zen. When he finally shows himself to her, Zen turns the tables and captures him. She hopes to learn what she is by examining Thaddeus. Zen is not the only one that wants Thaddeus, however. EMMETT wants him too, and he has comparable abilities to Zen. As Zen and Emmett clash in a battle over Thaddeus, Zen is overtaken by EMMETT and rendered unconscious. Emmett is an enforcer for the laws of scions. He sought Thaddeus for crimes committed two thousand years ago. However, Emmett finds that Thaddeus has led him to Zen, an unknown creature who looks exactly like Nikaule. Emmett struggles with the impossibility of Zen’s existence. Before Emmett can tell Zen about Nikaule, Joseph contacts Zen; he has found and apprehended Samuel. Despite her inexperience with demonic creatures, Zen is determined to free her father. She escapes Emmett to get to Samuel, her last anchor to humanity and her last chance for the truth. She drives to New Orleans to rescue her father. When she sleeps, the story on the pages of the old book coalesces in her dreams. When Zen comes face to face with Joseph, she begins to understand that what she thought was a forgotten book of the Bible actually contains the truth of what she is. She also learns what her mother is and who she is--Makeda, Queen of Sheba, born of Djinn and human. Made a Child of Darkness. Zen finds her father and believes that he will fill in the blanks. She believes he will finally explain how her vampire mother could do the impossible—give birth to a girl fathered by a human. However, Zen soon discovers that Joseph has already killed Samuel by feeding his heart to a starving fledgling vampire. She goes into a blind rage and fights Joseph. Zen punches a hole in his chest. As she gropes for his heart, Joseph summons the powerful Djinni IBLIS. The Djinni does extensive damage to Zen and throws her against the windshield of a car. He and his master, Joseph, leave Zen for dead. When she regains consciousness, Zen finds the Djinn members of Nikaule’s family tending to her. With her father gone, Zen feels that her humanity is gone with him. Emmett tries to pull her into the structure of the society of the Breed. But Zen is through with rules and structure. She isolates herself. When a Djinni comes to her to tell her that Joseph still lives, she decides her only future with the Breed is finding Joseph and getting her revenge.
Published: Feb. 19, 2019
ISBN: 1941637566