Angelo Paul Ramunni, a CPA in public practice for over 40 years, is currently an instructor-in-residence at the University of Connecticut in the area of accounting and financial literacy. He has been a director of numerous non-profit organizations over the years. He is currently a member of the board of directors of The Connecticut Mutual Holding Company, a regional 3 bank holding company. He lives in Canaan, Connecticut with his wife and best friend Marcia. He has two grown children, Daniel and Joy, and two incredible grandsons, Joey and Colin.

It was in 2008 when Paul suddenly (and inexplicably) had the urge to start playing the accordion again. He had taken lessons and played in an accordion band from when he was 10 years old to age 17, but had not touched the accordion since those early days. Once the urge to play re-entered his life, he started hunting for old and collectible accordions. He contacted Jack and Kathy White of the then Cleveland Accordion Museum and purchased a large portion of their collection and continued to find more units at tag sales and other locations. He established “The New England Accordion Connection & Museum Company” and opened its doors to the public in late 2011. It is currently attached to his home in Canaan, Connecticut and contains over 300 vintage accordions in the museum as well as an additional 200+ accordions for sale in its two showrooms.

His passion now is to not only play the accordion, but to collect and save the accordions and memorabilia he finds. The accordion is an integral part of Americana and our Country’s heritage. As such, it has a legacy which we need to preserve and move forward into the 21st century. He has recorded many of the stories people have told him that are related to the accordion and the people who played it over the past 200 years. In September 2018, he self-published a book entitled “Accordion Stories from the Heart,” a collection of some of the stories he has collected. It is available on Amazon. The museum has a mobile component, referred to as “NEAM Mobile,” which consists of a dozen or so antique accordions which he brings with him when he plays for groups of people. As he entertains people of all ages, he discusses the history and stories attached to these accordions.
Contact Info:
Email: ramunni@comcast.net

“A vivid and surprisingly involving work about accordions and the stories they inspire.”
– Kirkus Reviews 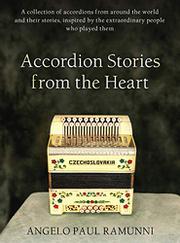 ACCORDION STORIES FROM THE HEART

A coffee-table book pays tribute to the accordion and the people who have been enchanted by its “calming and happy voice.”

This beautifully designed work by Ramunni (Left Turn, Right Turn, U-Turn, 2011) chronicles his efforts—in conjunction with the New England Accordion Connection & Museum in Canaan, Connecticut—to amass a large collection of accordions. An unexpected but moving byproduct of this project is a large assemblage of stories about the people who sold or donated those instruments to the museum. The author is a life-long accordion aficionado himself, here remembering the teasing he got for playing “the squeezebox” while growing up on Long Island in the 1950s and ’60s. The museum offers visitors a chance to play accordions. In the course of those encounters, Ramunni has often seen people awash in sentimental memories of embracing the instruments when they were younger: “It is often like seeing two people, who were the best of friends in their childhood, suddenly meet again by chance after being apart for many years. It can be an emotional time.” Those heightened feelings of recognition and nostalgia run through many of the tales the author relates. A woman named Carol tells him about her Uncle Vinnie, who only knew how to perform three songs on the accordion he was eventually buried with. There’s a story of a man who taught himself to play the instrument while sitting in a coal shed; a heartwarming reminiscence revolves around a survivor of Russia’s Communist regime who was left virtually nothing by the state except his accordion. Readers also learn about a valuable accordion presented to Pope Pius XII in 1943. The author clearly doesn’t intend his book to be a history of the accordion. He makes passing reference to its surprising antiquity, dating back to ancient China, but his focus is on far more recent and mostly American conceptions of the instrument. In addition, he doesn’t see this slim volume as any kind of study of accordion music or the mechanics of the instrument. This is an entirely inviting, beginner-friendly work, one that seeks to spread the word rather than instruct specialists. “Just as we have a heart beat as generated by our hearts,” Ramunni writes, “the accordion has a tempo that we give it every time we play a song.” The gallery of short, richly impressionistic stories the author has heard in his quest to add accordions to his enormous collection serves to stress the strong communal aspect of both the music and the instruments. The sheer love and passion involved are easily visible in the lavish book’s dozens of color images by debut photographer Homolka of gorgeous accordions, some of them as intricately exquisite as any prized violin or piano. And that enthusiasm is mirrored in the vibrant vignettes the owners shared with Ramunni—tales of family, wine, celebration, and love.

A vivid and surprisingly involving work about accordions and the stories they inspire.