My trajectory from a blissfuly bohemian childhood in Greenwich Village to Reed College and a Ph.D. in Biochemistry at Brandeis University was a relatively straight line that disintegrated completely when I abandoned the dream of a scientific career in favor of the mundane (and difficult) realities of life as a writer.
I have never regretted that decision- the joys are worth the uncertainty. For more about me, please see the excerpts of my memoir at www.barbarariddle.com. My debut novel, "The Girl Pretending to Read Rilke," is a coming-of-age story about a young woman in a lab during the frenetic early days of molecular genetics. It was called "Sharply funny," by writer Barbara Ehrenreich, who knows from experience what it was like. An award-winning screenplay version by writer/director Laramie Dennis (www.laramiedennis.com) is available on request.

Currently I am seeking a publisher for my just completed novel, "Too Many Countries." After the Velvet Revolution in 1989, Czech emigre filmmaker Tonda Menzel and his American wife Cait return to Prague and a shocking accusation makes Cait wonder if Tonda is really the man she thought she knew when she fell madly in love 5 years prior. Can their volatile relationship survive yet another shock? How much self-sacrifice should marriage require?

“Although Riddle's narrative is often humorous and frequently quirky, it also offers a stark reminder of the scientific community's treatment of women joining its ranks in the '60s...A whimsical, funny and poignant historical novel.”
– Kirkus Reviews 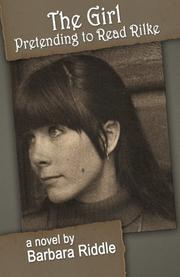 THE GIRL PRETENDING TO READ RILKE

Riddle debuts with a pleasantly offbeat coming-of-age novel that looks back at the changing roles of women in the 1960s.

In 1963, 19-year-old Bronwen Olwen has just completed her junior year in a prestigious Portland, Oregon, college and is heading to Boston for a prime summer internship in a biochemistry lab—and, not incidentally, a couple of months of living with her boyfriend, Eric Breuner. He’s four years older, ensconced in Harvard, and working toward a junior fellowship in the biology department, where he’s a superstar. Indeed, Bronwen is daunted by what she accepts as his intellectual superiority. But this summer, she’s decided to become an expert in the literary works of early 20th-century Bohemian-Austrian poet Rainer Maria Rilke as her nonscientific area of proficiency, because “All the scientists in Eric’s crowd had a little niche, a subarea of nontechnical knowledge on which they could hold forth.” Her boss, Felix, is a strange whirlwind of frenetic energy, always “rocking back and forth on the balls of his feet.” Bronwen helps him with some problem experiments, enabling him to complete his long-overdue doctoral thesis. Her grueling hours at the lab prove more gratifying than her time spent with the obnoxiously arrogant Eric and his cohort of pseudo-intellectual male scientists. However, it takes a series of crises to force her to reexamine her life. Although Riddle’s narrative is often humorous and frequently quirky, it also offers a stark reminder of the scientific community’s treatment of women joining its ranks in the ’60s. For example, Felix can’t fathom why Bronwen would choose to study science given her other options: “Girls don’t just whimsically decide to give up a social life and nice clothes to hang around in smelly hellholes with slavedrivers like me ordering them around.” Throughout, Riddle mixes solid, straightforward storytelling with long, stream-of-consciousness sections in which the omniscient narrator jumps into Bronwen’s chaotic mental meanderings. The run-on sentences in the latter can be confusing at times, but they effectively reflect the protagonist’s inner struggle as familiar young adult angst meets bubbling social change.

Member of the Wedding