Barry Lee Swanson is an assistant professor emeritus from Knox College in Galesburg, Illinois. He received his Bachelor of Arts in English literature from Illinois Wesleyan University and a master’s degree in educational administration from Western Illinois University. He has served as president of the Carl Sandburg Historic Site Association and was a founding member of the Galesburg Public Art Commission. Swanson has published various articles and poetry for regional publications, and coauthored a textbook for a course in educational studies. Currently, he writes a column for a local newspaper in his hometown of Galesburg, Illinois, and is in the process of writing his second novel.
Preceding his professorship at Knox, Swanson served in the United States Army, was an English teacher, basketball coach, and school administrator. He also served as a full-time lecturer in the College of Education at the University of Illinois in Champaign-Urbana, where he earned his Doctor of Education degree in 2001.
Barry and his wife, Gail, reside on Lake Norman in North Carolina. They have three children and five grandchildren. 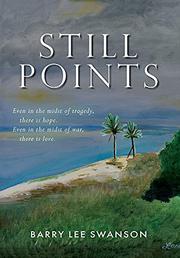 An evocative historical novel involving the haunting letters and diaries of a World War II flyboy stationed in the South Pacific.

It’s the final August weekend of 1940, and 20-year-old Philip Zumwalt, recently graduated from college, has two goals. He wants to be a famous musician/songwriter, and he dreams of becoming a pilot. For now, he will be moving from his hometown of Nebo, Illinois, to the neighboring town of Payson, where he will be the new high school music teacher. But first there’s a dance to attend at the casino in Quincy’s Highland Park, featuring Tommy Dorsey and Frank Sinatra. He meets the mesmerizing Elinor “El” Robinson, and they dance the night away together. Several days later, Philip begins his teaching assignment. Much to his dismay, he discovers that the woman who so dazzled him at the casino is a senior at Payson-Seymour High School. Worse, she is his student in band and in his class on world problems. The magnetism between them continues, but romance is forbidden until El’s graduation. Swanson uses the world problems class discussions to gently introduce readers to the diverging views roiling the country about whether the United States should or will become involved in the war raging in Europe. After the school year, Philip resigns, and he and El are free to fall in love. Philip enlists in the U.S. Army Air Force, where he hopes to become a pilot. During basic training in Illinois, he acquires the first of his three Army-issued diaries, which are liberally quoted through Part 2 of the novel. This is not an action-driven narrative, although it contains descriptions of several bombing missions that highlight feats of bravery and determination. But these are sandwiched between the long hours Philip spends reading modern classics, drinking to dull his psychological turmoil, struggling to come to terms with the brutality and moral conflicts of war, and writing. Making ample use of cultural and linguistic references of the period—especially through the lyrics and rhythms of popular music—Swanson takes readers inside a painful time capsule.

The author's reflection of growing up in a small town in Illinois, of innocence to recognition, his senior year in high school, and playing in the 1966 Illinois boys' basketball state championship game.

Personal Doorways, Songs of the City and Prairie