Daniel Fallon holds a BA in psychology from Antioch College and an MA and PhD in experimental psychology from the University of Virginia. He is professor emeritus of psychology and professor emeritus of public policy at the University of Maryland at College Park, where he also served as academic vice president and provost. He concluded his professional career as chair of the Education Division at Carnegie Corporation of New York, where he directed grantmaking in education.

Fallon has published widely on learning, motivation, educational reform, and contemporary cultural issues. He is the author of The German University: A Heroic Ideal in Conflict with the Modern World, which was awarded the Eugene M. Kayden prize for excellence in humanities. His latest book, Love's Legacy: Viscount Chateaubriand and the Irish Girl, was designated a winner in the 2021 New York City Big Book competition, and won Best Trade Book and Best History Book in the 2021 Southwest Design and Production Awards competition.

Born in Cartagena, Colombia, where his father was then chief of staff of the Colombian Navy, Fallon came to the United States with his parents at two years of age. His mother was a native of New Orleans. He currently lives in Santa Fe, New Mexico. 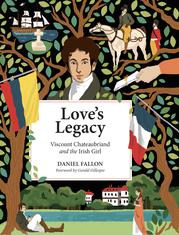 This nonfiction work investigates the mysterious link between a family’s history and a French writer.

Daniel Fallon inherited two letters after his father’s death in 1989 that were written to Thomas Fallon, the author’s great-great-grandfather, in 1817 and sent by Hyacinthe Pilorge, a secretary. Pilorge worked for the influential writer, diplomat, and historian François-René de Chateaubriand (1768-1848). One letter included Chateaubriand’s signature, a capital C, and one was signed by Pilorge; both concerned Thomas’ education. It seemed likely that these letters could relate to a family legend that Irish girl Mary O’Neill offered food and shelter to Chateaubriand in the 1790s when he was living in London in dire straits. She later married Patrick Fallon and had a son named Thomas. Before returning to France, the grateful Chateaubriand pledged to educate the boy. Eventually, Thomas immigrated to Colombia, where he distinguished himself as a mining engineer and sired a line of similarly accomplished descendants. But why did Chateaubriand, often strapped for money, follow through on his promise? Could he have fathered Mary’s child? After a short Chateaubriand biography, Daniel Fallon’s book details his painstaking research into historical records, genealogy, and other sources—including DNA—to discover the truth and its significance. The author, a professor emeritus at the University of Maryland at College Park, writes an informed, intelligent study that’s part history, part mystery. By nailing down “the Fallon affair,” the volume makes a real contribution to Chateaubriand scholarship. It also serves to demonstrate how a fine education can considerably boost a family’s fortunes. The legend of the Irish girl adds a romantic layer to the author’s diligent digging, and though a good deal of speculation, maybes, and might-haves draw these reflections together, the reasoning is plausible and well supported.

An engaging historical treasure hunt with some intriguing findings.