Born in Romania under the oppressive communism regime, Eliade Moldovan had a dream, that one day he may join the free world.

But life has unexpected turns and in 1989 the communist regimes in East Europe fell one after the other. He had high hopes for a new society and a new life. But this did not happen, the damage done during the fifty years of a dictatorial and cruel regime left deep wounds into the society, that could not re-conciliate itself with the new realities. He was torn apart, his family deserved better opportunities, and decided to immigrate to Canada, and Canada opened its arms for him and his family in 1993.

Today he lives in the Greater Toronto Area with his wife. They enjoy vacations and have traveled around the world, exploring nature and undertaking the occasional adventurous trips. In Toronto, they enjoy their ballroom dancing weekends and look forward to babysitting their lovely grandson.

“This intellectualized sci-fi finale deftly delivers eccentricities and deities that set it apart from most shaggy-god stories.”
– Kirkus Reviews 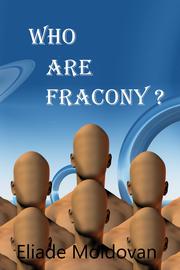 Benevolent aliens save humans on Earth from extinction—but discord arises over the visitors’ heretical religious views.

In Moldovan’s (The World Ends Tomorrow, 2018, etc.) sci-fi trilogy, the nation of Esperanto dominated late 24th-century Earth, a planet of 28 billion people. But on Jupiter’s moon Europa, a colony of space folk known as the Fracony was monitoring and directing human affairs. Secretly allied with elites in the Esperanto government—mainly the popular chief executive (“secretary”) Clara—the Fracony came to the rescue after human-caused eco-disasters and plagues struck. Still, only half a billion people survived. With the Fracony now out in the open in this third installment, Clara grants the humanlike ETs (actually alien souls projected across the universe to be born in human bodies) a lab in Antarctica. But the public is displeased by the aliens’ mission: ascertain if Earth was originally a Fracony world billions of years ago, before the solar system’s resident god did a “reset” to create Homo sapiens as obedient worshippers. The Fracony’s polytheist cosmology—numerous gods who are, essentially, exponentially advanced aliens—outrages some Esperanto citizens, especially the tradition-bound priest and “Minister of Religious Affairs” Quinn. Quinn’s anti-Fracony campaign is manipulated by Arram, a leader of a secret society, who covets power. From assassination to media exploitation, Arram uses his allies, agents, and Quinn to remove rivals and turn public opinion against the Fracony. But Arram underestimates Clara, the Fracony, and even fanatical Quinn.      Romanian-born Moldovan offers sci-fi more akin to philosophical musing (with a faintly satirical edge) than anything concretely speculative in terms of future super-science or tech. It would help if readers were familiar (as every 25th-century schoolkid is) with Russian scientist Nikolai Kardashev’s categories of theoretical cosmic civilizations. Type I can use energy to dominate its home world; type II can harness the total energy of its star system; type III can control neighboring systems; and so on, each more godlike than the next. Even in 2427, humanity is only “type 0.” The Fracony are “type V” and not immune to literally playing god, even as the “real” deities they acknowledge may fall in the “type VI” or “type VII” stages. The author toys with religion here in the same way more conventional sci-fi writers handle FTL drives, robots, and exobiology. He throws in some truly inspired bits of Robert Anton Wilson-scale weirdness when Arram wrangles leaders of the other sinister secret societies so beloved of conspiracy fiction (Freemasons, Illuminati, Bilderberg, etc.) for meetings that end up being discussions of Euclidean versus non-Euclidean geometry. Which are important. Still, characters tend to be mouthpieces for ideas and symbols rather than three-dimensional players, and much of the loosey-goosey storyline is left unresolved by the end (the matter of Earth’s God, for example). What’s clear is Moldovan’s condemnation of dogmatic religious mania, as shown in one character’s summation of the dangerous Quinn: “Truth has nothing to do with this guy’s values. His problem is that whatever is not in his holy books does not exist.” No players come forth as Adam or Eve stand-ins, which is a remarkable feat for sci-fi in these territories.

This intellectualized sci-fi finale deftly delivers eccentricities and deities that set it apart from most shaggy-god stories.

when you really want something to happen, the whole universe will conspire so that your wish comes true

The Rise of Esperanto

Three hundred and fifty years in the future, the world's political structure teeters on the edge of disaster as tensions intensify between countries and continents. Vespacia's military and business communities join forces, plotting to gain control of Esperanto in the face of its astonishing growth. Despite continued insistence to the contrary, world domination seems to be the Vespacians' ultimate goal. Amid turmoil, Ovi, a simple and open-minded priest, opposes the increasing violence. Struggling with the meaning and evolution of understanding God and His means, Ovi finds himself at the head of a new religious faction, one that disagrees with hard-core believers in the Old Testament's teachings. With his newfound status as leader of this prominent religious faction, Ovi is in a unique position to prevent the Vespacians from achieving world domination, even as he further questions the existence of God. As the conflict between Vespacia and Esperanto spreads and becomes increasingly violent, Ovi works to find a lasting resolution to the conflict, but will it come too late? In the midst of the madness of the widening war between Esperanto and Vespacia, the world's fate lies in the hands of one very ordinary man and a benevolent alien god....
Published: Aug. 18, 2017
ISBN: eBook: 978-1-7753288-3-4, print

Four hundred years into the future, Clara, the Secretary of Esperanto, is faced with a dilemma: mankind is threatened by extinction and humankind’s only hope is alien technology—but it comes at a price. The Fracony, a super-civilization that visited Earth in the past, has built models showing that this apocalypse, triggered by human virus experiments, is inevitable. Are the Fracony’s models right? Clara is the only human who can communicate with the Fracony . Her qualities were detected when she was only few months old and she was trained all her life for the challenge to lead the world if such a scenario were to hit mankind. But training cannot foresee everything—there are too many moving parts—and the Fracony might have their own plans . . . Clara must take drastic actions to contain the virus and deal with the Fracony. Will she make the right choice?