Juli Boit is an author, community builder and non-profit leader working at the intersection of faith, global health, and human dignity. For 17 years Juli has lived and worked in Africa, founding and serving as International Director of Living Room International, a community-led nonprofit providing hospice and palliative care services to adults and children in Western Kenya.

Through her training as a Family Nurse Practitioner, Juli has combined her dual passions of healthcare and social justice into a unique expression of love that is providing desperately needed services in an underserved community. That said, Juli would be the first to add she’s the one who has been loved the most by her patients and neighbors in her home village of Kipkaren — most notably by Titus, her Kenyan husband and their children Sharon, Alice, Ella, Geoffrey, and Ryan.

Juli’s book, From Beyond the Skies, chronicles her journey of moving to Kenya, founding LRI and becoming the adoptive parent of three children with Sickle Cell Disease.

“A heroic, uplifting account of easing others’ suffering and building a family.”
– Kirkus Reviews 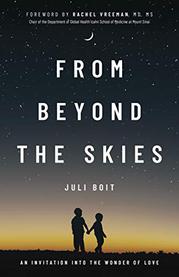 FROM BEYOND THE SKIES

A memoir about fighting AIDS and finding love in Kenya.

In her nonfiction debut, Boit recounts her experiences working at a care center in western Kenya. The shift—she’d gone there after working as a nurse on an HIV unit in Los Angeles—is more than just moving from a developed to a developing country. It also involves a drastic shift in cultural attitudes. As Boit mentions, in the U.S. in 2004, HIV was mostly treated as a chronic disease rather than a death sentence. In Kipkaren River Village where she takes up residence, however, not only are the circumstances very different (no electricity, no running water, no indoor plumbing, and so on), but so were the attitudes toward the disease itself. She met dedicated doctors who very much wanted to change that, and she also met a man named Titus, whom she married. They had a child, Ella, but the real focus of the narrative is on a premature baby named Ryan, whom Boit took into her home. Soon after, she and Titus agreed to adopt Ryan. The story expands to include their adoption of two more children. Throughout the tale, Boit maintains a glowingly optimistic, companionable tone. She never makes the foremost mistake of so many memoirists—thinking the mere details of her story will in and of themselves interest readers. Instead, she consistently ties her memories to broader insights about love and about her own personal Christian faith. “Over the years,” she writes, “as I stepped closer to those in their suffering, I came to recognize the nearness of God—present in the hard places and the pain, in the spaces where death and destruction always wanted to win.” Boit has worked in those hard places, and her memoir illuminates them.

A heroic, uplifting account of easing others’ suffering and building a family.

From Beyond the Skies

FROM BEYOND THE SKIES: AN INVITATION INTO THE WONDER OF LOVE: Kirkus Star

FROM BEYOND THE SKIES: AN INVITATION INTO THE WONDER OF LOVE: Named to <i>Kirkus Reviews'</i> Best Books, 2021