Matthew J. Diaz currently resides in Phoenix, AZ with his wife and four kids. The Last Day of Regret is his first book he has authored. He holds his B.S. in Social Studies Secondary Education and his M.A. in Global Leadership from Fuller Theological Seminary. He has been volunteering, interning and working full-time as a youth director starting in 2001. He was officially ordained as a pastor in 2011, and continues to minister to teenagers in various settings. Currently he is a Bible Teacher at Northwest Christian School teaching the New Testament Epistles for 11th grade students, as well as Graphic Design for multiple grades. He is in charge of student engagement with local missions projects as well as leading one of the school’s several international trips.

“An honest, loving account of losing someone and finding them again.”
– Kirkus Reviews 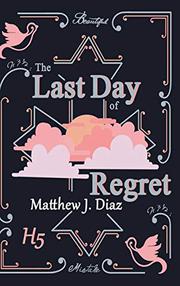 THE LAST DAY OF REGRET

Diaz reflects on the death of his sister Hannah in this debut Christian memoir.

Diaz’s sister Hannah was five years his junior, and though they got along well enough as children, by the time Hannah was 24, Diaz was only speaking to her indirectly, using his mother or his wife as an intermediary. “Some people are givers, and some are takers,” explains the author, who had three young children at the time demanding his full emotional attention. “My sister was a taker, and my solution was to stop giving. It was Hannah’s world, and the rest of us were just living in it.” A challenging personality since the age of 14 and diagnosed with borderline personality disorder at 20, Hannah had spent years drinking, taking drugs, having promiscuous sex, overeating, and self-harming. Not long after yet another spat and tentative reconciliation, Diaz got a voice message from his mother: “Her lips are blue. Come quick.” At first Diaz suspected suicide, but as more facts emerged, the truth of Hannah’s death became unclear. This book represents Diaz’s attempt to find closure in his relationship with his sister. In it, he records the difficulties—and triumphs—of her brief life, interrogating his own mistakes and interpreting the events according to his Christian faith. What emerges is an exploration of regret: both the regret Diaz feels for things he did or did not do and the regrets that plagued Hannah in the final years of her life. Diaz’s prose is imbued with the grief, remorse, empathy, and frustration that one would expect as he recalls the tumultuous nature of his relationship with his sister: “I don’t think I blatantly ignored her as a form of malice. I was doing my best not to respond negatively, but I just ended up not responding at all.” While this sometimes rises to a level of saccharine, the narration is generally grounded and conversational. He approaches the subject with humility, and he manages to portray Hannah in a surprisingly sympathetic light. Diaz sees every tragedy as an opportunity to learn from God—a perspective that seems to serve him well. There may be similar memoirs with more polished narrative structures, but the sincerity that pervades Diaz’s book does much to buoy its emotional impact.

An honest, loving account of losing someone and finding them again.