N. J. Lujan was born in Washington, DC then raised in a small town of West Virginia. Her first experience with journalism and writing complex, thrilling stories was as a teenager when she was the public affairs officer for her high school. It was then she discovered her love for writing. After graduation she entered the Army serving in the U.S. and Europe, then later went on to enjoy a successful corporate career while still fueling a passion for creating complex fictional stories. Today she continues to use parts of her backdrop to vividly take you on a journey that will leave you wanting for more.

“An engaging read that offers a novel spin on the notion that you can’t go home again.”
– Kirkus Reviews 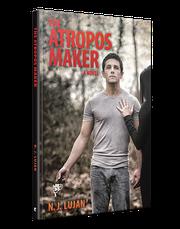 A military thriller about the travails of a secret soldier who attempts to put her family first.

At the heart of Lujan’s debut novel is Norma Veurr, who helped found Atropos, a top-secret, black-ops government agency, many years ago. Despite vowing never to come back to the espionage game, she agrees to do so in 2009 after two decades away; however, she has a sense of impending doom after her solo mission, and she reflects back over how she got to this point. First, her mind travels back three days to her visit to her small hometown of Martinsburg, West Virginia. LeRoy, the town sheriff, still suspects her in the murder of her father, Mackenzie, who forged Norma into the weapon she became. Then her mind drifts back further to meeting her husband, Alex, who was part of a team that rescued her from a mission gone awry. Next, she recalls the dramatic birth of her son, Alexander—the reason she left Atropos 20 years ago. Lastly, she thinks about a fateful night when Alexander visited his grandfather, which led to Norma’s return to Atropos. Later, Alexander joins Atropos and rapidly ascends to leadership; when his team is captured, he must rely on an unexpected rescuer. In this volume, Lujan colorfully tells Norma’s story from her miserable childhood onward. She’s a well-developed character, as are the most important people in her life. The author elaborates on why Norma makes the choices she does, which is often to protect her loved ones. Atropos is certainly an important element in the book but not as much as readers may expect; Lujan writes more about what led Norma to and away from Atropos and less about its actual missions. The narrative, which slips back and forth through time, can be a bit confusing, as can the fact that Norma’s husband and son share similar names. However, Norma’s exhilarating tale is worth the effort.

An engaging read that offers a novel spin on the notion that you can’t go home again.

A Black Ops agent searches for his missing daughter while someone threatens his agency in this third entry in Lujan’s action-thriller series.

Alexander Veurr is exceedingly protective of his 12-year-old daughter, Elina. As part of Atropos, a covert government organization headquartered in Washington, D.C., he’s adept at hand-to-hand combat and the uses of various weaponry. He trains Elina in these skills as well, but she has little interest in the family business. She’s also not very keen on Xavier, the retired Atropos team member and quasi-bodyguard who constantly shadows her; she’d rather have alone time with the boy she likes. Then, one day, Alexander’s nightmare becomes a reality when Elina suddenly vanishes. Around the same time, a man named Nolan is assigned by the president of the United States to monitor Atropos’ missions. It’s a mere excuse, however, to make himself head of the agency and push others out; as a result, Alexander and his comrades have no resources to track down Elina. They’ll have to rely on their intellect to figure out how and why someone abducted Alexander’s daughter. Lujan sets this story several years after The Atropos Maker II: A New Order (2020). Many series regulars crop up, although the author wisely centers on only a handful. Elina is a standout among the cast, as she alternates between professionalism and immature behavior, as when she refuses to speak to Xavier after he intentionally embarrasses her. Her kidnapping infuses the novel with plenty of suspense, as the circumstances of her disappearance are initially a complete mystery. There are bursts of action, as well, and Lujan’s concise prose maintains a brisk tempo (“Tires scream leaving treadmarks on the broken asphalt as the engine revs the cylinders wide open”) even during scenes involving father-daughter arguments over boys. Newcomers to the series will easily follow the story, although the somewhat-jarring final chapter will make more sense to those who’ve read the previous installment.

A riveting, spirited actioner and a worthy addition to its series.

At the heart of The Atropos Maker is Norma Veurr, a top-secret agent for a covert government organization. After a long hiatus from combat and clandestine missions, Norma returns to Atropos, the secret agency unit she helped establish over 20 years prior. However, the bizarre circumstances surrounding her first assignment fuels her suspicion that she is a pawn in a bigger game, one threatening her, the future of Atropos and someone close to her heart. “Over my dead body would I ever leave him and return to the agency.” Norma remembers those words that now prove to be untrue as she rejoins Atropos—a covert government organization—after so many bloodless years. She has just carried out her first mission back, suspiciously without her team. Something tells her things are not what they seem and betrayal is imminent. It turns out a devastating weapon created by the agency may soon be decommissioned, and things need to change. Norma is beginning to speculate that it isn’t her skill set that the agency wants. Instead, accepting her back was their way of gaining access to a more lethal successor. Is her gut feeling right? Will the agency soon turn on her? Norma must escape the clandestine smoky mirrors of Washington DC and see clearly before it’s too late.
Published: Jan. 14, 2020
ISBN: 1532090625