Tara O'Grady studied television and film production during her undergraduate degree at St. John's University in New York, and then moved to the university's Budapest, Hungary campus where she continued to explore the arts. Her master's degree from St. John's is in literature and education. After graduation, she began teaching high school literature, drama, film and musical theater. O'Grady then moved to Spain to study flamenco dance and Spanish language.

Returning to New York, she worked at Columbia University, New York University, and eventually back at her alma mater where she taught art and music to student teachers in the School of Education. She also earned another degree in Latin American literature and film at the university's Argentina campus.

O'Grady finally found her dream job when she was hired to teach creativity and imagination at Lincoln Center for the Performing Arts in New York City. But due to budget cuts, after five years the prestigious arts center laid off half of the education department. That's when O'Grady decided to use her creative skills to write a song for a music video that she sent as a pitch to GM headquarters in Detroit. She asked Chevrolet if they would sponsor a cross country road trip to honor her deceased Irish immigrant grandmother who made the journey from New York to Seattle in a Chevy Bel Air in 1957. Chevrolet loved her idea because O'Grady offered to help market their 100th anniversary, and in return, they offered her three vehicles, an overflowing gas card, and hotel vouchers across America. After completing the road trip, she wrote her memoir which she describes as Eat, Pray, Love meets Thelma and Louise on the Yellow Brick Road, soundtrack included.

Jeanine Cummins, author of American Dirt, describes O'Grady's memoir as a story that is "at once familiar and extraordinary – it could be anyone’s family, any American journey – but the storytelling is so poignant, so lively and enchanting, that the tale is utterly seductive. Tara O’Grady sings from the page in this charming debut, and her readers will be keen for an encore."

After the road trip, O'Grady became a jazz singer, recording artist and songwriter. She has released five albums of jazz, blues and folk music and performs with her band all over the world. As a self appointed Bliss Ambassador, she takes fans on her music tours, as well as writing retreats and mind, body, spirit adventures to Ireland, France and Spain to teach folks how to find joy and meaning in their lives.

MIGRATING TOWARD HAPPINESS is her first book. She is the daughter of Irish immigrants and lives in New York City. She is currently at work on her next book and her sixth album of music.

“An unconventional and perceptive memoir that aims to inspire readers to 'discover the happiness that is waiting to be revealed at his or her core.'”
– Kirkus Reviews 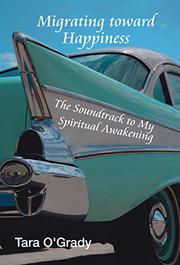 A restless woman takes an epic road trip across the United States in this musically inspired memoir.

For most, a layoff is a cause for panic, but when O’Grady lost her job at an unnamed not-for-profit organization, her immediate response was to think, “This is a gift.” Freed from office drudgery and eager to escape New York City, which she saw as “cluttered with concrete and steel,” O’Grady decided it was time to “see the USA in her Chevrolet,” just like her Irish-immigrant paternal grandmother, Catherine, did decades earlier. The latter died before the author was born, so this trip was an attempt to connect with an ancestor whom she never knew. It was also a way for her to “wake up to my soul’s purpose” and refocus a life that had become disconnected from her goals and dreams, which included jazz singing. Remarkably, O’Grady convinced Chevrolet to loan her a vehicle for the journey. With a friend for company, she took off from New York, intending to drive cross-country to Seattle. In thoughtful, insightful prose, she describes her trip and the people she encountered, from workers at an Ohio factory that made General Motors truck engines to the owner of a hotel in tiny Wall, South Dakota. These personal connections are what interest O’Grady the most, so readers shouldn’t expect lengthy digressions on the majesty of Yellowstone or Glacier National Park, where she made brief pit stops. Instead, the book employs an unusual structure, like a mixtape, with each chapter title taken from a particular song—such as Bruce Springsteen’s “Badlands” for when she travels through South Dakota or Ben E. King’s “Stand by Me” as she recalls her beloved Granny Nora’s death. The author proves to be a firm believer in signs (“I must have a guardian angel protecting me or a spirit guide sending me messages. There’s always a sign”), and she tells of looking for messages from her deceased grandmother. She also offers some surprising insights on the nature of the American Dream and the immigrant experience.

An unconventional and perceptive memoir that aims to inspire readers to “discover the happiness that is waiting to be revealed at his or her core.”

Migrating toward Happiness - a memoir by Tara O'Grady

Konk Life Key West Book Review, 2019 What I discovered on repeating my grandmother's road trip across the US, 2019 The Magic of Dreams, 2016 Tara O'Grady and All that Jazz, 2014