Tom Farrell has worked as a golf course starter, a chemist, and clerked at City Hall in Chicago while attending law school. He has served as Vice President of Rocky Mountain Fiction Writers, a nonprofit corporation, and was a past finalist in the Pikes Peak Writer’s Contest in the Mystery, Suspense and Thriller category. Now retired from practicing law, when he’s not handicapping, he can be found on the golf course or at a local jazz club.

“A smart and fast-paced crime drama that will leave readers wanting more from this author.”
– Kirkus Reviews 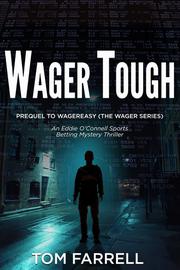 A thriller in which a man under pressure from the mob investigates a murder.

As the novel opens, young Eddie O’Connell, hero of Farrell’s Wager Easy(2021), is in a bind. He owes the Burrascano crime family a gambling debt so large he can’t repay it. Uncharacteristically, instead of stuffing Eddie in an oil drum and depositing him in the nearest deep body of water, the mob accepts a counteroffer: Eddie can travel from Chicago to Denver and take over the Team Player Collection Agency on the mob’s behalf. Team Player had until recently been run by Eddie’s acquaintance Zany, but Zany was gruesomely and dramatically murdered, and Eddie has positioned himself as the most likely candidate to unravel the crime. “If Burrascano called in a gang of known mobsters to run the store, the killer would never surface,” Eddie thinks. “But if someone like me was running the place, the killer might think he could take advantage of the situation.” This is a very big “if.” Eddie knows nothing about running a collection agency and is acting without the sage advice of his older and wiser crime-solving Uncle Mike (a detective detained on another case). He gets help from Team Player’s manager, Paula “Rudi” Rudinger, and soon the two are embroiled in tracking Zany’s murderer through the labyrinthine worlds of gambling and organized crime—all while Eddie tries to keep his own gambling demons in check.

This latest outing from Farrell is even more compulsively readable than Wager Easy. The author has a pitch-perfect ear for the intricacies of the no man’s land Eddie inhabits. He’s “caught between two vicious worlds,” beholden to the Burrascano crime family and its nefarious but oddly ethical strictures and the blue-wall codes of his uncle the cop. The downplayed role of Uncle Mike in this adventure might have worked against the novel (the chemistry between the uncle and nephew is particularly enjoyable), but Farrell compensates in two ways. First, he drops the reader into the action at a breakneck moment and never slows down. (As Eddie himself notes, his role in his partnership with Uncle Mike was always action-oriented. With Uncle Mike mostly missing from this adventure, Eddie's quick temper drives the tempo.) And second, he fills the narrative with memorable characters, including an enjoyably despicable bad guy and, of course, Rudi, whose own backstory steadily builds. Farrell has mastered the art of action-thriller pacing, punctuating the novel with unexpected turns, and each of his characters has a distinctive voice and motivation. The everyday dangers of Eddie’s world—as he navigates the violence of the mob and the violence of the law—are expertly limned, and the result feels very assured: “Zany used to say that sometimes horses find a soft spot they never expected and they run the race of their life,” Eddie reflects at one point. This novel and its predecessor comfortably occupy that soft spot; they both probe vulnerability to good effect.

A crackerjack crime novel about an upright Chicago bartender on the hunt for a killer. 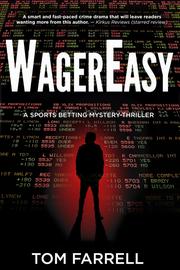 A debut thriller set in the shady world of gambling in Chicago.

Farrell’s novel starts off in 2018 at the scene of a gruesome crime. In a cold, abandoned Chicago factory, a small-time gambler has been found dead, with his partially burnt body hanging from a web of ropes. Private investigator Eddie O’Connell is on the scene as a guest of his Uncle Mike, a retired homicide detective whose old partner, Liz, is in charge of the murder investigation. Liz invited the O’Connells to the crime scene because she respects Uncle Mike’s experience and Eddie’s instincts—even though Uncle Mike left the force after an “Internal Affairs inquiry had left a sour taste in his mouth” and Eddie is basically “a bartender with a start-up PI business and a gambling debt.” (Both men also sometimes do occasional investigative jobs for a shady crime boss named Rosario Burrascano.) Eddie suspects that Liz asked them to visit this crime scene because she thinks it might have an organized crime connection; he finds out, however, that he has a personal connection to the case himself: He knows the dead man—or rather, he knew him. He and Jimmy “the Leech” Golding were old comrades at the track, where they spent a lot of time betting on horses. He soon realizes, however, how little he really knew about his pal Jimmy: “We were the kings of the racetrack, and I didn’t learn his full name until last night when they zipped up the body bag.”

The author smoothly and confidently deepens the story, which involves a tangle of conflicting loyalties. As the violence of the so-called Blowtorch Murders increases, Liz comes under intense pressure from her department and the FBI to make faster progress—but because of Mike’s murky connection to Burrascano, she’s forced to keep him at arm’s length from the official investigation. Mike has his own resources in his old department (“loyalties ran deep and Mike O’Connell had helped a lot of officers on the way up the ladder”), but it’s Eddie’s intensifying personal connection to the crimes that forms the true backbone of the book. This can be to the book’s detriment, at times, because it results in no other character being as well developed as Eddie is. However, Farrell also beautifully realizes the setting of Chicago in winter, which helps to enhance the procedural elements of the story. He skillfully unfolds the complicated tale as Eddie delves deeper into the underworld and finds out how it intersects with the impending legalization of sports betting in Illinois. The novel presents a bleak landscape of rival gangs always looking to double-cross one another as well as a memorably startling characterization of the Chicago police and court system. Eddie is just the right kind of noble but flawed hero to travel between the two realms, and Farrell crafts an array of familiar and unfamiliar genre elements into a genuinely gripping read.

A smart and fast-paced crime drama that will leave readers wanting more from this author.

Prequel to WagerEasy and First Book in the Wager Series When a mob-connected bookie named Zany is murdered, Eddie O’Connell must take over Zany’s operation and find the killer. The trail leads to an exclusive, private gambling club where simulcast wagering on horse racing is used as a front for illegal sports bets with Zany. With the assistance of Paula Rudinger, the manager of Zany’s operation and former lover, Eddie meets those who owe gambling debts. Eddie had run up a gambling debt of his own, but now finds himself doing collection. Another bookie makes a grab for the gambling club’s business and seems like the perfect suspect. Eddie doesn’t buy the theory and must walk a fine line amid the cops, the club’s high rollers, and a local crime boss who only cares about the store’s flow of revenue during the upcoming football season. Each faction wants Eddie out of the picture, but he won’t leave until he gets justice for Zany.
Published: Jan. 19, 2022
ISBN: 9781736593219