A Zimbabwean born, black South African woman, Dr. Patience Mpofu has won multiple awards as one of the inspirational african women leaders in mining in Africa, and was the former Vice President of an Australian-listed mining company. She is a Global Mining Sustainability Thought Leader (ESG), Executive Leadership Coach, and Women in STEM advocate for change. Patience started from humble beginnings in Africa, got married at 21, and won a scholarship sponsored by one of the largest mining companies, Anglo American, to study for a PhD in Australia. She was part of a research team that worked to solve water sustainability issues, sponsored by 10 global mining companies. As a single mother in a foreign country, she completed her PhD while working, winning several awards, and authored over 10 international peer-reviewed journals on sustainability in the mining industry by the age of 32.

Patience has now turned her 25-year trailblazing career in mining into empowering and paving the way for other women coming up against the same barriers she experienced on her way to success. In 2019, Patience won CEO Global Most Influential Woman in Mining in Business and Government in South Africa and Southern Africa Regional awards. In 2020, she won the CEO Global continental award for the mining sector in Africa. “The awards represent something deep for me,” she said. “They are a symbol for the struggle of a black woman in mining. Let me embrace them all on behalf of all women. The fight for gender equality is a moral and an economic issue. Women make not just good leaders, but great ones.”

Patience has become one of the most influential and a sought-after global speakers and coaches. She was recognised as one of the 36 female leaders from around the world to take part in the 2019 IWF Fellows Program, an honour that changed the course of her path and inspired her to write this book as part of her Legacy Project. She is founder and CEO of Peak Performance with Patience, an academy for women in STEM that offers free and low-cost membership for various mentorship and masterclasses. She is also CEO of Insight Mining Experts, a global platform that connects technology experts to solve sustainability issues in the mining industry and help them meet their ESG commitments.

Patience is a former member of the UN Women GICC, focused on accelerating the advancement of women and girls in STEM. In addition to holding a PhD from UNISA Australia, she has an MBA from Wits Business School in South Africa, and an AMP from INSEAD. She is a member of the invite-only IWF Australia Chapter and is the G100 Global Chair for Sustainable Mining (ESG). She currently lives with her son William, between Sydney, Australia and Johannesburg, South Africa.

“An African woman maneuvers her way to success in a hypermasculine industry in this business self-helper.”
– Kirkus Reviews 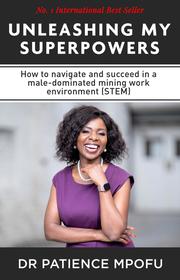 An African woman maneuvers her way to success in a hypermasculine industry in this business self-helper.

Mpofu, an executive leadership coach, derives career and management lessons from her unusual life story. Born into a middle-class family in Zimbabwe, she was encouraged by her father to pursue a career in a STEM field. She earned a degree in chemistry and then a Ph.D. at the University of South Australia and took a job in South Africa at the multinational Anglo American Platinum mining company. It was a rewarding but difficult road, in her telling. As a Black woman in an industry traditionally dominated by White men, Mpofu often found herself “the only one in the room who looks like me.” Initially relegated to routine tasks, she had to lobby her bosses for more challenging assignments. When she got them, they involved trips to mineral-processing facilities in the field, which caused issues for her as a single mom as well as sartorial problems with the coveralls tailored for men’s bodies. Moving from production to the business-strategy side of the company, the author was passed over for promotion in favor of a male hire. A leap to a new company brought her a vice presidency, but when that position was made redundant, she had to scramble to reinvent herself. From these ups and downs, Mpofu distills wisdom on business success, including the importance of setting clear, actionable career goals; building networks of female mentors and co-workers who can help one another weather male-dominated workplaces; cultivating a humane leadership style; avoiding feelings of inadequacy and imposter syndrome; projecting confidence; and persevering through setbacks with sheer grit.

Mpofu’s autobiographical narrative, while often engaging, makes for a somewhat disorganized and repetitive framework for her ideas, which are not presented in a systematic way. (The book’s few exercises are perfunctory and often just refer readers to a lesson template on her coaching company’s website.) Many of her managerial and motivational tropes are familiar, but she has original and captivating ones of her own, some suggested by her experiences on safari. (An incident in which an elephant snaked its trunk around her neck illustrates the importance of staying calm in a crisis, and she enjoins managers to be generous with their underlings the way a lion, after gorging on a kill, will allow vultures and hyenas to feast on the rotting remains.) Mpofu’s prose sometimes lapses into fulsome management-lit uplift (“We need leaders who are visionary, compassionate and empathetic, with high levels of consciousness; leaders who value their employees and communities, and create sustainable shared value”), but she can also be pithily aphoristic—“One must be resilient and think fast, rather than wait for life to happen”—and even lyrical in the poems she sprinkles into the text. (“I am thankful even to those who have given me pain / Without pain, there is no growth, there is no gain.”) Mpofu’s writing sharply registers the galling implicit bias facing women in the office—“When the table is taken away and the door is shut in your face, leaning in doesn’t help”—but her program of working hard, self-directing, forging relationships, and being open to new experiences is a hopeful, empowering one.

A useful and stimulating guide to building a career under trying circumstances.