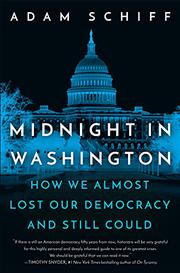 How We Almost Lost Our Democracy and Still Could

A full-throated denunciation of Donald Trump and his congressional enablers.

Every small-d democratic institution in America was threatened during Trump’s years in the White House. But as Schiff notes, “no institution suffered more under the Trump presidency than Congress, which saw its oversight powers emasculated and its impeachment power rendered obsolete.” The problem was that much of the damage was “self-inflicted” by members of the GOP, a party that has “become an antitruth, antidemocratic cult organized around the former president.” That Schiff was a leading Trump critic and manager of the first impeachment did not endear him to the president. Though Trump sent an odd signal of admiration by way of Jared Kushner, whom Schiff pegs as a “smooth operator,” the former president spent most of his energies in infantile calumniation, calling the author “Shifty Schiff” and the like. Schiff repaid the attention by assembling a careful case against Trump, one that, Schiff avers, proved the president’s guilt but did not convince enough Republicans that there was a good answer to the questions, “Why should I be the one to remove him? Why should I risk my seat, my position of power and influence, my career and future?...Why should I?” Most of this book, bracketed by horrific scenes from the Jan. 6 mob attack on the Capitol—of which Trump, Schiff insists, was the prime mover—is a long, densely detailed account of the discovery process in the first impeachment trial. It would threaten to become tedious reading, due to all the minutiae, were it not for Schiff’s skill as a storyteller, a skill useful for a trial attorney to have, and for his habit of peppering his narrative with withering assaults on McConnell, Gosar, Barr, et. al. He also offers the revelation that many leading Republicans have urged him in private (while publicly disavowing having said any such thing), “Keep doing what you’re doing.”

For those wondering what happened to America between 2017 and 2021, Schiff offers a key firsthand account.