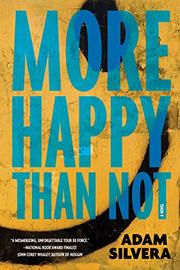 MORE HAPPY THAN NOT

In a Bronx neighborhood of the near future, it’s no secret that at least one person has taken advantage of the Leteo Institute’s new medical procedure that promises “cutting-edge memory-relief.”

Reeling from his discovery of his father in a blood-filled bathtub, there are lots of things that Aaron Soto would like to forget—the smile-shaped scar on his own wrist attests to that. Puerto Rican Aaron meets a boy named Thomas from a neighboring (and sometimes rival) project who shares his love of comic books and fantasy fiction. The two develop a friendship that makes Aaron wonder if he’s a “dude-liker,” leading to a breakup with his girlfriend. When Thomas doesn’t reciprocate, Aaron considers the Leteo procedure for himself. This novel places a straightforward concept—what if you could erase unwanted memories?—squarely within an honest depiction of the pains of navigating the teen years and upends all expectations for a plot resolution. Debut author Silvera has an ear for dialogue and authentic voices. He scatters references to his characters’ various ethnicities in an unforced manner—of a midnight showing of a movie based on their favorite fantasy series, Thomas says “I was the only brown Scorpius Hawthorne.” Thomas is the foil to Aaron’s conviction that there’s an easy way out in a multifaceted look at some of the more unsettling aspects of human relationships.