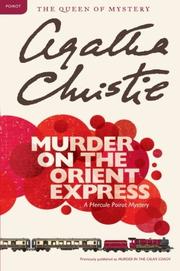 MURDER ON THE ORIENT EXPRESS

A murder is committed in a stalled transcontinental train in the Balkans, and every passenger has a watertight alibi. But Hercule Poirot finds a way.

**Note: This classic Agatha Christie mystery was originally published in England as Murder on the Orient Express, but in the United States as Murder in the Calais Coach.  Kirkus reviewed the book in 1934 under the original US title, but we changed the title in our database to the now recognizable title Murder on the Orient Express.  This is the only name now known for the book.  The reason the US publisher, Dodd Mead, did not use the UK title in 1934 was to avoid confusion with the 1932 Graham Greene novel, Orient Express.