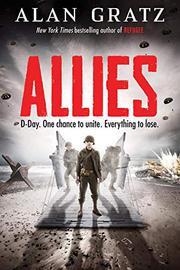 Gratz (Refugee, 2017, etc.) weaves together fictionalized accounts of individual experiences of D-Day, the “beginning of the end of the Second World War.”

The action begins just before dawn on June 6, 1944, and ends near midnight that same day. Six different operations in settings across Europe, each fictionalized with imagined characters but based on true events, exemplify the ordinary people in extraordinary situations who risked or gave their lives to destroy what Gen. Eisenhower styled “the German war machine” and “Nazi tyranny.” The narrative moves from scene to scene as the day marches on—a sea invasion, French citizens and Resistance fighters on land, and soldiers arriving by air—but repeatedly returns to Dee, a German fighting on the American side and hiding his German identity from comrades like Sid, a Jewish American determined to wipe out the Germans even as he suffers insults from his peers. The vigorously diverse cast is historically accurate but unusual for a World War II novel, including a young Algerian woman, a white Canadian, a Cree First Nations lance corporal from Quebec, British soldiers, a black American medic, and a Frenchwoman. The horrors of war and the decisions and emotions it entails are presented with unflinching honesty through characters readers can feel for. In the end, all the threads come together to drive home the point that allies are “stronger together.”

Both an excellent, inclusive narration of important historical events and a fast-paced, entertaining read.