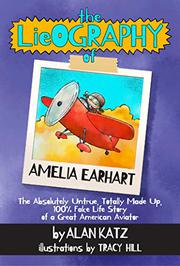 THE LIEOGRAPHY OF AMELIA EARHART

The Absolutely Untrue, Totally Made Up, 100% Fake Life Story of a Great American Aviator

All her life, Amelia has only one thing on her mind: flight.

At her third birthday party, all her presents are plane-themed. Her fifth grade class laughs at her eagerness to fly. She’s excited to attend a stunt-pilot show but misses it thanks to an out-of-date poster. Through it all, she clings to her pronouncement that “Someday I will fly.” Even when she finally procures a plane, she’s told that girls can’t fly (when proven wrong, the naysaying adult man apologizes). She perseveres and eventually makes big plans for her 50th flight. Katz lards the baldly fictional narrative with absurdities such as metafictive tricks, anachronisms, and gags of convenience. Blessedly, the book closes with “some factual facts” about Earhart’s life, most crucially noting that she apparently had “no particular interest in aviation during her childhood.” Thus, the book is self-admittedly what its title promises. The grayscale cartoons give no indication that any character is any race other than White. Rather, as Christopher Eliopoulos does in his illustrations of Brad Meltzer’s Ordinary People Change the World series, Hill depicts his protagonist the same way no matter her age, which becomes problematic when she’s 17 and still looks like a 3-year-old among tall, adult-proportioned figures. This read is best for those whose senses of irony and humor are developed enough to enjoy the foolishness and then dismiss it. Companion titles about Babe Ruth and Thomas Edison publish simultaneously.

Pure silliness: shelve far, far away from the biographies.