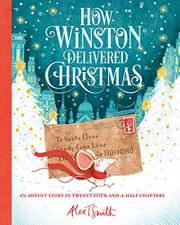 Neither snow nor rain nor mountains of yummy cheese stay the carrier of a letter to Santa.

So carelessly does 8-year-old Oliver stuff his very late letter to Santa into the mailbox that it falls out behind his back—leaving Winston, a “small, grubby white mouse” with an outsized heart, determined to deliver it personally though he has no idea where to go. Smith presents Winston’s Christmas Eve trek in 24 minichapters, each assigned a December “day” and all closing with both twists or cliffhangers and instructions (mostly verbal, unfortunately) for one or more holiday-themed recipes or craft projects. Though he veers occasionally into preciosity (Winston “tried to ignore the grumbling, rumbling noises coming from his tummy”), he also infuses his holiday tale with worthy values. Occasional snowy scenes have an Edwardian look appropriate to the general tone, with a white default in place but a few dark-skinned figures in view. Less-crafty children will struggle with the scantly illustrated projects, which run from paper snowflakes to clothespin dolls and Christmas crackers with or without “snaps,” but lyrics to chestnuts like “The 12 Days of Christmas” (and “Jingle Bells,” which is not a Christmas song, but never mind) at the end invite everyone to sing along.

A Christmas cozy, read straight or bit by bit through the season.