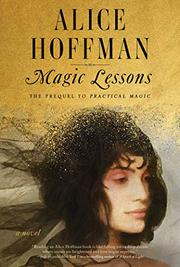 Set in late-17th-century England and America, the pre-prequel to Hoffman’s Practical Magic (1995) and The Rules of Magic (2017) covers the earliest generations of magically empowered Owens women and the legacy they created.

In 1664, Hannah Owens, practitioner of “the Nameless Art” sometimes called witchcraft, finds baby Maria abandoned near her isolated cottage in Essex County, England. She lovingly teaches ancient healing methods to Maria, whose star birthmark indicates inherent magical powers; and since Hannah considers ink and paper the most powerful magic, she also teaches Maria reading and writing. After vengeful men murder Hannah in 1674, Maria escapes first to her unmotherly birth mother, a troubled practitioner of dark, self-serving magic, then to Curaçao as an indentured servant. At 15 she is seduced by 37-year-old American businessman John Hathorne (his name an allusion to Nathaniel Hawthorne, who wrote about mistreatment of marked women). Enchanted by the island, Puritan Hathorne loses his rigidity long enough to impregnate Maria before returning to Salem, Massachusetts, without saying goodbye. Maria, with new daughter Faith, whose birthmark is a half-moon, follows him. The ship on which she travels is captained by a Sephardic Jew who gives her passage in return for treating his son’s dengue fever, an excuse for Hoffman to link two long-standing unfair persecutions—of smart women as witches and Jews as, well, Jews. That Maria will find a truer love with warmhearted Jewish sailor Sam than with icy Hathorne makes sense in terms of later Owens women’s stories. For the earlier books to work, Maria must found her female dynasty in Salem, but first she and Faith face betrayals, mistakes, and moral challenges. Maria uses her powers to help others but often misreads her own future with devastating results; separated from Maria during her childhood, emotionally damaged Faith is tempted to use her grandmother’s selfish “left-handed” magic.

Master storyteller Hoffman’s tale pours like cream but is too thick with plot redundancies and long-winded history lessons.