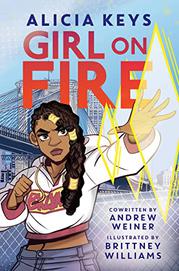 Smart, quiet 14-year-old Loretta “Lolo” Wright struggles to stand up for herself until, on what should be a routine trip to a convenience store, her 16-year-old brother, James, is mistakenly accused of stealing by the police. When the officer slams her brother to the ground, Lolo’s powers manifest for the first time. Meanwhile, Michael Warner, who lives in the same Brooklyn housing projects as the Wrights, is rejected from the football team for being too small. He develops exceptional fighting abilities and shortly afterward gets involved in working for a drug dealer named Skin. When Skin sees a video of Lolo levitating the cop who assaulted James, he wants to recruit her as well, and he tries to extort protection money from Lolo’s dad, who owns a moving business. Lolo must convince Michael to choose a different path; it’s only by working together that they can defeat Skin. Featuring dizzying shifts among multiple perspectives, this full-color graphic novel presents vibrant, expressive characters set against mostly simple, bright backgrounds, with extreme violence depicted in gory detail. The narrative briefly explores class issues and racial stereotypes, but while the setup is intriguing, the momentum fizzles and the pieces never quite come together. Most main characters are Black; Skin reads as White, and secondary characters appear racially diverse.

An action-packed tale for those thirsty for more superhero stories.