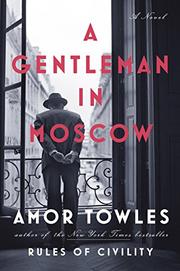 A GENTLEMAN IN MOSCOW

Sentenced to house arrest in Moscow's Metropol Hotel by a Bolshevik tribunal for writing a poem deemed to encourage revolt, Count Alexander Rostov nonetheless lives the fullest of lives, discovering the depths of his humanity.

Inside the elegant Metropol, located near the Kremlin and the Bolshoi, the Count slowly adjusts to circumstances as a "Former Person." He makes do with the attic room, to which he is banished after residing for years in a posh third-floor suite. A man of refined taste in wine, food, and literature, he strives to maintain a daily routine, exploring the nooks and crannies of the hotel, bonding with staff, accepting the advances of attractive women, and forming what proves to be a deeply meaningful relationship with a spirited young girl, Nina. "We are bound to find comfort from the notion that it takes generations for a way of life to fade," says the companionable narrator. For the Count, that way of life ultimately becomes less about aristocratic airs and privilege than generosity and devotion. Spread across four decades, this is in all ways a great novel, a nonstop pleasure brimming with charm, personal wisdom, and philosophic insight. Though Stalin and Khrushchev make their presences felt, Towles largely treats politics as a dark, distant shadow. The chill of the political events occurring outside the Metropol is certainly felt, but for the Count and his friends, the passage of time is "like the turn of a kaleidoscope." Not for nothing is Casablanca his favorite film. This is a book in which the cruelties of the age can't begin to erase the glories of real human connection and the memories it leaves behind.

A masterly encapsulation of modern Russian history, this book more than fulfills the promise of Towles' stylish debut, Rules of Civility (2011).