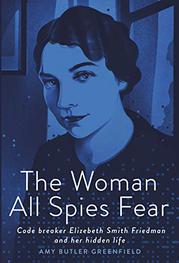 THE WOMAN ALL SPIES FEAR

This biography of a groundbreaking cryptanalyst is entwined with crucial episodes in U.S. history.

Thorough research and accessible, enthusiastic writing create a page-turning read as thrilling as a spy novel. The text begins with Elizebeth Smith’s childhood: born in Indiana in 1892 to a Civil War veteran father and a former teacher mother, both devout Christians, she was determined to attend college despite her father’s opposition. She succeeded, finding her way to Chicago, where a library visit led to a research job working for eccentric millionaire Col. Fabyan at his estate, Riverbank. There she met a Russian-born fellow employee, her future husband, William Friedman. They eventually comprised Fabyan’s Department of Ciphers and married despite both families’ religious objections (William was Jewish). Almost unbelievable adventures ensued as the couple practiced their craft and plotted their escape from Riverbank’s maniacal owner. Elizebeth’s skills enabled the prosecution of alcohol-smuggling criminals during Prohibition. The couple’s work also saved lives and helped capture spies during both world wars. Between the wars, they threw elaborate code-breaking parties. Sadly, they also contended with antisemitism, misogyny, and William’s mental health issues; nonetheless, the tone overall is compelling and upbeat. Nearly every chapter about this intrepid, intelligent, energetic woman ends with a cliffhanger whose promise is fulfilled in the following one. Elizebeth’s life unfolded against a backdrop of some of the 20th century’s most pivotal events, and this riveting title is a fine tribute to her accomplishments.