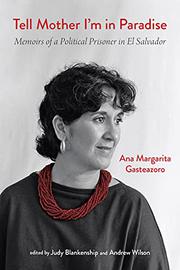 Memoirs of a Political Prisoner in El Salvador

A wrenching oral history/memoir of a Salvadoran political activist and revolutionary.

For a few years before her death from cancer in 1993, Gasteazoro recounted her remarkable stories to her friend Blankenship, who worked with Wilson to create this multilayered, affecting first-person narrative of a young woman’s radicalization during a turbulent time of repression by El Salvador’s government and military. The country’s civil war, which lasted from 1979 to 1992, resulted in 75,000 deaths. Sadly, Gasteazoro would not live to experience her country’s first democratic elections, for which she had fought. Born into a well-connected, Catholic, upper-middle-class Salvadoran family, Gasteazoro, a highly intelligent, savvy young woman with a fierce spirit and strong conscience, was essentially deprived of a university education like her brothers because her parents figured she would just get married anyway. However, as Blankenship writes, “she never married, and she never forgot the injustice of her father’s decision.” In 1977, as she and her friends were becoming increasingly aware of the intensifying political agitation and nurturing their burgeoning activism, they were horrified by the assassination of Padre Rutilio Grande, “the first important religious leader to be murdered” during that tumultuous period. As the author shows, the primary conflict was caused by a government that “accused the reform initiative of being communist inspired and ignored the fact that it mostly affected public lands.” Gasteazoro joined one of the opposition parties, and by 1979, demonstrations by activist organizations and strikes by the trade unions were met with murderous violence by the authorities. Many of her friends were “disappeared,” and Gasteazoro led a dangerous underground life until she was eventually arrested, tortured, and imprisoned for two years in the notorious Ilopango Prison for Women. Here, the details are horrific and visceral. Tragically, Gasteazoro died before she could run for political office in the 1993 elections, but Blankenship and Wilson are commended for bringing her story to light.

A harrowing firsthand look at the Salvadoran civil war and its enormous human toll.