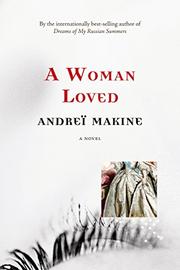 One of two new books by Siberian-born Makine, this energetic novel takes place in Soviet Russia and tells the story of a doomed film about Catherine the Great.

Young filmmaker Oleg Erdmann is obsessed with Catherine—her porous nationality, her historical importance, her series of lovers—so he tries to write a screenplay that encompasses all of her life, despite a friend’s warning: “too much detail ends up fragmenting the image of the main characters.” His screenplay—a sprawling, ambitious mess—finds its way into the hands of numerous critics: his friends, his teachers, and, eventually, the State Committee for Cinematic Art. With all this input, will the film ever get made? And if so, will it be even close to what Oleg originally intended? Decades pass in this novel, and eventually Oleg becomes a middle-aged man, reading once more the books about Catherine, trying “to rediscover his youth.” Makine isn’t interested in assessing Oleg’s talent as an artist; instead, he wants to show how, under a communist regime, art becomes just one more tool of ideology. Catherine the Great becomes a nebulous figure here, a symbol into which different ideologies can read different things. Oleg’s interest remains relatively pure, however: she came from Germany to Russia, just like Oleg's own family. In other words, he understands her and maybe even loves her. Happily, this novel lacks a heavy hand—or even a steady one, perhaps. Occasionally, it flails around in its conversational style, jumping from Catherine’s biography to Oleg’s, blending all of this together in a way that sometimes makes it unclear where exactly you are. But this is part of the fun—it presents an “intoxicating mass of detail,” and it's a marvel to get lost in.

A lively look at the pitfalls of making state-sponsored art.