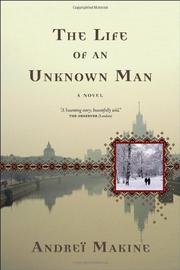 THE LIFE OF AN UNKNOWN MAN

Makine presents a story within a story and thus winds up focusing on the lives of two “unknown men.”

Ivan Shutov has been living in Paris for 20 years but has had only desultory success as a writer. Three years after he wrote a novel about Afghanistan, tensions flared up again in the region, so he was flattered to be invited as a guest on a television show, but his performance there left much to be desired. Meanwhile, his personal life is in shambles, for his girlfriend Léa, half the age of the 50-year-old Shutov, is calling it quits. (As a parting, sarcastic shot she points out that his name in Russian means “clown,” a move Shutov determines is not helpful for his self-esteem.) He had tried to capture some romance in the relationship by comparing their love to that found in Chekhov, but a nice irony is that the Chekhov story that he keeps alluding to is entitled “A Little Joke.” Shutov decides to return to St. Petersburg, in part to find his former lover, Yana, in the hope of rekindling the old flame. Instead, he gets much more than he expected by meeting Georgy Volsky in the boardinghouse where he’s staying. Volsky is an old man who lived through the siege of Leningrad and is now primarily known for being mute, but he opens up to Shutov, spinning out a tale of war, trauma, love and terrible beauty. He survived the siege both because of his devotion to his art (he’s a singer) and to his love, Mila, though in the Stalinist era they were both arrested on trumped charges of crimes against the Soviet state. Volsky’s quiet dignity ultimately helps Shutov see some of the superficiality of his own life.

A lyrical little novel about hope triumphing over adversity.