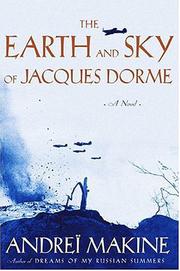 THE EARTH AND SKY OF JACQUES DORME

The attempt to record the star-crossed story of two lovers who meet on a WWII battlefield makes up Makine’s limpid eighth novel (following A Hero’s Daughter, 2003, etc.).

An unnamed narrator initially describes his own experiences growing up in a dilapidated Russian orphanage in the 1960s, when Nikita Khrushchev has been officially denounced and the narrator and his comrades ape their elders’ revisions of history by contriving “heroic myths” featuring their unknown fathers. The narrator is befriended by a French nurse who has spent many years in Russia and, from the nurse’s piecemeal fragments of memory, learns the history of the eponymous Jacques Dorme, a French fighter pilot who was captured and interred in a makeshift German POW camp, whence he escaped, made his way eastward, and joined a Russian bomber squadron—and briefly encountered the nurse (renamed Alexandra), to whom their “single week [together] had been a long life of love.” In the final section, the narrator travels to the village where Dorme grew up and confides to the pilot’s sole survivor his own conflicted wish to reshape as a novel his homage to lives destroyed by war, in an effort to assert and perhaps finally fully understand “their deep connection to what I am.” Makine handles this moving story’s tricky time shifts expertly, and—except for a handful too many romantic wartime clichés—creates satisfyingly complex images of a lonely boy dreaming his way into a fuller reality, a stranger in strange lands seeking comfort through human connection, and a courageous woman who knows exactly how much happiness she dares to expect. And nobody surpasses Makine as a maker of stunning visuals—such as the recurring memory of a snapped necklace, beads cascading onto a floor—which subtly underscore his narrative’s plangent romantic momentum.

As the Russian-born French author’s dual literary citizenship suggests, he may really be both his generation’s Chekhov and its Proust.