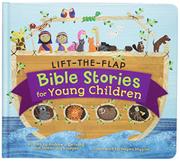 Ten tales from the Old and New Testaments, with plot points and lessons hidden beneath large, shaped flaps.

Higgins depicts Jesus as a bit larger than those around him but otherwise draws him and the rest of the cast—including angels—with similar-looking round heads, wide-open eyes, slightly crooked beards (on the men), and dark brown or olive skin. Cycling arbitrarily among various tenses, the abbreviated, sanitized, and informally retold episodes begin in “a garden” with the tree, most of Adam and Eve, and the “tricky serpent” who “will trick them” initially hidden beneath die-cut flaps. Lifting the largest reveals the disobedient first couple sporting flashy animal-skin togs and text that promises that “God had a plan to save people from sin.” After Noah boards the “crowded, noisy, and stinky” ark, Moses leads the escape from plague-ridden Egypt (“Frogs and locusts! Yucky sores and flies!”), and “David bonks Goliath.” God’s promise eventually bears fruit with the birth and select miracles of Jesus. In the climactic scene, three distant crosses hide beneath a flap that depicts Jerusalem, while behind a tomb in the foreground an angel literally fizzes with fireworks. Beneath a bush readers see Mary (Magdalen) weeping until the risen Jesus (beneath another bush) gives her a hug: “Go tell the disciples that I am alive!”

Younger audiences may be mostly interested in the bonking and stinky parts, but the rudiments are at least in place for homiletic discussion.