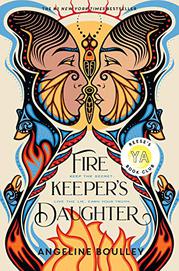 Testing the strength of family bonds is never easy—and lies make it even harder.

Daunis is trying to balance her two communities: The Sault Ste. Marie, Michigan, teen is constantly adapting, whether she is with her Anishinaabe father’s side of the family, the Firekeepers, or the Fontaines, her White mother’s wealthy relatives. She has grand plans for her future, as she wants to become a doctor, but has decided to defer her plans to go away for college because her maternal grandmother is recovering from a stroke. Daunis spends her free time playing hockey with her Firekeeper half brother, Levi, but tragedy strikes, and she discovers someone is selling a dangerous new form of meth—and the bodies are piling up. While trying to figure out who is behind this, Daunis pulls away from her family, covering up where she has been and what she has been doing. While dealing with tough topics like rape, drugs, racism, and death, this book balances the darkness with Ojibwe cultural texture and well-crafted characters. Daunis is a three-dimensional, realistically imperfect girl trying her best to handle everything happening around her. The first-person narration reveals her internal monologue, allowing readers to learn what’s going on in her head as she encounters anti-Indian bias and deals with grief.

A suspenseful tale filled with Ojibwe knowledge, hockey, and the politics of status.