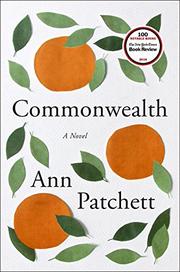 Two families are fused, atomized, and reconfigured by a stolen kiss, a child’s death, and a bestselling novel.

In her seventh work of fiction, Patchett (This Is the Story of a Happy Marriage, 2013, etc.) turns from the exotic locales and premises of Bel Canto (2001) and State of Wonder (2011) to a subject closer to home: the evolution of an American family over five decades. The story begins on a very hot day in Southern California at a christening party for Beverly and Fix Keating’s second daughter, Franny. A lawyer named Bert Cousins shows up uninvited, carrying a bottle of gin. With its help, the instant infatuation he conceives for his stunning hostess becomes “the start of his life.” After Bert and Beverly marry and move to Virginia, the six newly minted stepsiblings are dragged unhappily into new relationships and settings. On another hot afternoon, one of the children dies from a bee sting—a tragedy compounded by long-kept secrets and lies. Jumping ahead, we find Franny in her late 20s, having an affair with a Saul Bellow–type novelist 32 years her senior. “Other than the difference in their ages, and the fact that he had an estranged wife, and had written a novel about her family which in its final form made her want to retch even though she had found it nothing less than thrilling when he was working on it, Franny and Leo were great.” Since Patchett comes from a blended family with the same outlines as the one in this book, the problems created by Leo's fictionalized family history, also called Commonwealth, are particularly intriguing. The prose is lean and inviting, but the constant shifts in point of view, the peripatetic chronology, and the ever growing cast of characters will keep you on your toes.

A satisfying meat-and-potatoes domestic novel from one of our finest writers.