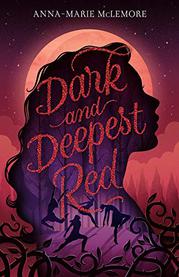 McLemore (contributor: Color Outside the Lines, 2019, etc.) weaves another magic spell in this haunting retelling of Hans Christian Andersen’s “The Red Shoes.”

In their most ambitious novel yet, they interconnect the present-day trials of Mexican American Rosella and Romani American Emil with those of Lavinia, a young Romani woman in 16th-century Strasbourg, who is revealed to be Emil’s ancestor. Emil and Rosella became friends as children when they realized their darker skin color and families’ religious practices set them apart from the rest of their friends. Now teens, the two are drawn to each other during their town’s “glimmer,” an annual weeklong occurrence in which magical things happen. This year, the red shoes created by Rosella’s family cause people to pursue their romantic passions. However, Rosella is cursed with uncontrollable dancing, very similar to the plague of dancing that swept through Strasbourg in 1518, when the townspeople blamed Lavinia and the White trans boy she loved for their affliction. McLemore’s lush sentence-level writing is masterly, painting vivid pictures of Lavinia’s world. The past timeline is especially compelling, and readers will eagerly return to it. The author spins a tale of first love, misfits forging their own places in the world, and the inherent prejudices of people who fear what they don’t understand.

This novel will leave an indelible mark on readers’ hearts.