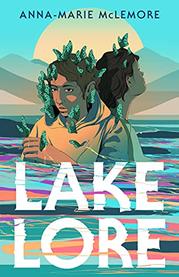 The rising waters of a hidden world threaten to drown Bastián and Lore, two trans nonbinary Mexican American teens, in the truths and pasts they’ve tried to cast away.

No one believes the legends about the world beneath the lake anymore. No one has seen it except Bastián Silvano and Lore Garcia. The world wouldn’t open when Bastián tried to show it to anyone else—not until Lore needed a place to hide on a day long before they knew one another’s names. Now, a mistake Lore desperately wants to leave behind has moved their family to the lakeshore, but the underwater world is not the same quiet refuge. It’s filled with living papier-mâché alebrijes, each one a representation of Bastián’s anxieties. As the once-secluded world swells above the surface, the lake’s seiches pull Bastián and Lore together again. In characteristically majestic prose, McLemore crafts vivid magic that balances scenes of overwhelming, unregulated emotions given life by the lake with soothing, sincere moments of love, self-affirmation, and gentle humor. The primary characters, Bastián (who has ADHD), and Lore (who is dyslexic), have family and friends who truly see them even as they confront trauma and internalized shame. Affinity draws them to one another, helping them toward growth that is significant because it does not erase their neurodivergence and because it is personal, not reliant on codependence.

A beauty both bright and deep.