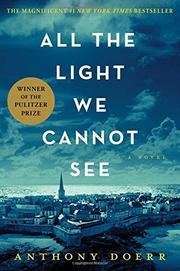 ALL THE LIGHT WE CANNOT SEE

Doerr presents us with two intricate stories, both of which take place during World War II; late in the novel, inevitably, they intersect.

In August 1944, Marie-Laure LeBlanc is a blind 16-year-old living in the walled port city of Saint-Malo in Brittany and hoping to escape the effects of Allied bombing. D-Day took place two months earlier, and Cherbourg, Caen and Rennes have already been liberated. She’s taken refuge in this city with her great-uncle Etienne, at first a fairly frightening figure to her. Marie-Laure’s father was a locksmith and craftsman who made scale models of cities that Marie-Laure studied so she could travel around on her own. He also crafted clever and intricate boxes, within which treasures could be hidden. Parallel to the story of Marie-Laure we meet Werner and Jutta Pfennig, a brother and sister, both orphans who have been raised in the Children’s House outside Essen, in Germany. Through flashbacks we learn that Werner had been a curious and bright child who developed an obsession with radio transmitters and receivers, both in their infancies during this period. Eventually, Werner goes to a select technical school and then, at 18, into the Wehrmacht, where his technical aptitudes are recognized and he’s put on a team trying to track down illegal radio transmissions. Etienne and Marie-Laure are responsible for some of these transmissions, but Werner is intrigued since what she’s broadcasting is innocent—she shares her passion for Jules Verne by reading aloud 20,000 Leagues Under the Sea. A further subplot involves Marie-Laure’s father’s having hidden a valuable diamond, one being tracked down by Reinhold von Rumpel, a relentless German sergeant-major.

Doerr captures the sights and sounds of wartime and focuses, refreshingly, on the innate goodness of his major characters.