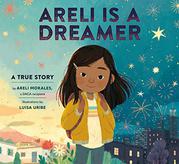 ARELI IS A DREAMER

A True Story by Areli Morales, a DACA Recipient

In her debut children’s book, a Dreamer recalls her journey from Mexico to New York and the subsequent reality of living as an undocumented immigrant.

Areli’s tale begins at Abuela’s house, where days brim “with family and sunshine,” delicious “mounds of tortillas and pollo con frijoles for supper,” and calls from Mamá and Papá from America. It’s an idyllic life, but it’s undercut when Areli’s big brother, Alex, born in America, returns to Nueva York, leaving Areli behind. Though Mamá and Papá work hard for “a better life,” the days pass—Areli’s birthday, Día de los Muertos, Navidad—with Areli separated from her family. Then one day Areli must leave Mexico and head to New York with a family friend. It’s a time of difficult goodbyes for Areli, and in the span of a few wordless pages, Areli’s in the midst of the “bigger and faster and noisier” bustle of New York, reunited with her family. In scene after scene of Areli’s life, Uribe’s colorful yet muted artwork depicts the young Dreamer’s voyage from Abuela’s house to America with a lovely sense of restrained appreciation. Morales, a DACA recipient, spins an admirable third-person memoir that deeply resonates thanks to keen details that conjure moods with a few choice words. Although Areli’s tale packs years of experiences in a tight 40-page picture book, the author maintains command of her readers’ attention by translating a life-disrupting migration into a confident, heartfelt story. Key highlights include Areli’s adjustment to life in America and an eye-opening trip to Ellis Island in the latter half of the book.

Powerful in its cleareyed optimism.