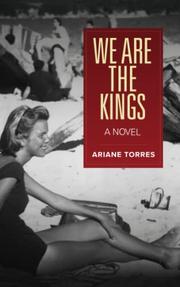 WE ARE THE KINGS

While traveling in South Africa with her boyfriend, Marcella glimpses an unknown but oddly familiar woman through a train window and is suddenly flooded with memories of her grandmothers, Adele and Nana, and other notable women in her life. This opening leads into a story that offers a nuanced exploration of a complicated family history. Marcella’s father came from a wealthy Protestant family, and her Jewish mother’s family owned a deli in Providence, Rhode Island. Over the years, Marcella, her sisters Isabella and Alessandra, her mother, her aunt Joan, and her grandmothers all experience volatile and difficult relationships with their own fathers, boyfriends, and husbands. Glamorous Adele, living alone on an elegant seaside estate, believes that she’s been haunted and protected all her life by the spirit of a nameless woman—an apparition that also appears to other female members of the family on rare occasions. Marcella narrates the women’s intersecting tales in a voice that combines snarky, self-deprecating humor, keen psychological insight, and affectionate tenderness. The episodic work effectively examines the ways in which women are forced to shrink themselves to accommodate men and how they still manage to express their own brilliance, nonetheless. Torres’ writing is vivid, moving, and often funny as it homes in on telling details, as when Marcella’s boyfriend Keith is described as “wearing Dad Nikes without any evidence of shame.” Her characters are well rounded and authentic, and she takes her time to paint a fully realized portrait of a family with unspoken secrets and unshakeable bonds and an emotional landscape in which what is unspoken is at least as powerful as what is. The novel’s nuanced treatment of complex themes, including death, divorce, illness, sexism, racism, and even the supernatural, makes this a very impressive debut, indeed.

An intimate and remarkable family saga.