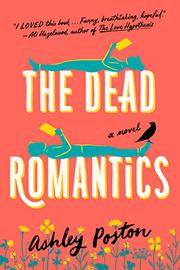 A romance ghostwriter who’s lost her motivation after a breakup is haunted by the spirit of her newly departed editor in this whimsical paranormal romance.

Florence Day doesn't believe in love or happily-ever-afters any longer. Unfortunately, she’s also the ghostwriter for a prominent romance novelist and is currently trying to finish her fourth and final contracted book. The deadline for her latest manuscript has already been pushed back several times, and her new editor, Benji Andor, isn’t allowing for any leeway. Florence can also see ghosts, an ability that’s made quite a name for her in her hometown but also partly contributed to the devastating end of her previous relationship. On the eve of her deadline, Florence finds her life upended by both an unexpected kiss with her editor and the sudden death of her beloved father. Returning home comes with its own set of baggage, though Florence holds out hope that her father’s ghost will appear for one last goodbye. She’s shocked, however, when the spirit that visits her isn’t her father but Ben Andor, mysteriously dead only a day after she’d met him. Now Florence must not only navigate her grief and fulfill her dad's last wishes, she must also contend with Ben’s confused ghost following her around until they can correct his unfinished business. The zippy banter between Florence and nearly everyone she meets keeps things moving at a sprightly clip. Every interaction is a delight, and getting to know the cast of characters in Florence’s orbit adds excitement to the book. The romance takes a bit longer to build, though, and flits in and out of focus. Florence and Ben share such chemistry that it’s a shame readers are often left waiting for them to interact. The ghostly element is fun and fresh, adding slightly higher stakes to Florence and Ben's happily-ever-after.

A sweet and sparkling adult debut.