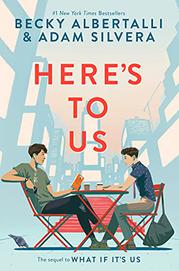 Former boyfriends’ “big Broadway love story” gets a revival in this sequel to What If It’s Us (2018).

Two years after their flash romance, Ben Alejo and Arthur Seuss (both now in college) couldn’t have drifted further apart. But destiny intervenes when Arthur lands his “ultimate top-tier pie-in-the-sky dream job” interning at a queer off-Broadway theater for the summer. Their long-anticipated reunion comes with a small catch: Both boys are basically taken. Ben met Mario in his college creative writing class, and, while they aren’t boyfriends, the connection—and attraction—is definitely there. Arthur’s officially dating Mikey, whose sweetness and steadiness saved him from remaining a “Ben-addled mess.” Cue the confusion—and inevitable broken hearts—as Ben and Arthur contend with their pasts and presents while trying to figure out their futures. Who will end up with whom? Albertalli’s and Silvera’s voices blend seamlessly, balancing the complexities of the boys’ situations with heartfelt (and heartwarming) nostalgia. As in the previous book, the narrative alternates between Ben’s and Arthur’s perspectives with off-the-charts wit and chemistry. Lovable side characters have grown and matured, while new characters expand the world to create an even stronger sense of community. Loose ends are tied up believably with an epilogue. Arthur is Jewish; Ben and Mario are Puerto Rican, and Mikey is White.

Swoonworthy wish fulfillment that checks all the right boxes.