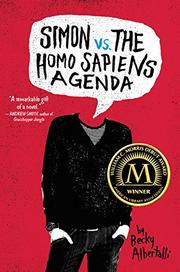 SIMON VS. THE HOMO SAPIENS AGENDA

From the Simonverse series, volume 1

A gay teen comes out to friends, family and classmates after his secret correspondence with another boy is discovered.

Ever since he discovered a post about being gay on his school's unofficial Tumblr, Simon has been corresponding with its author, an anonymous gay classmate who calls himself Blue. Their conversations, which readers see interspersed with prose chapters written from Simon's point of view, are heartfelt, emotionally intimate and increasingly flirtatious—enabled, perhaps, by the fact that neither boy knows the other's identity. Simon is impulsive, full of heart and not always as careful as he should be. When he leaves himself logged into Gmail at the school library, a boy named Martin reads Simon's emails with Blue and uses the threat of outing Simon to insinuate himself into a relationship with one of Simon’s female friends. Simon's social landscape is carefully and seemingly effortlessly drawn. Through light and often humorous detail, readers see clearly not only each individual character, but also the complex set of group dynamics at play in Simon's loving family and circle of friends. While Simon is focused on Blue, other characters go on journeys of their own, and the author is careful not only to wrap up Simon's story, but to draw attention to the stories the romance plot might overshadow in lesser hands.