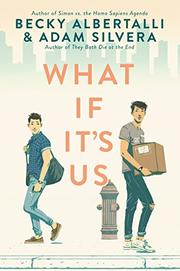 WHAT IF IT'S US

Fan-favorites Albertalli (Leah on the Offbeat, 2018, etc.) and Silvera (They Both Die at the End, 2017, etc.) join forces in this tale of a New York City summer romance.

When Ben and Arthur cross paths at a post office but fail to exchange contact information, they both regret the missed connection. Through mutual efforts and a healthy dose of coincidence, the boys find each other again. A rocky series of do-over first dates proves that they are different in many ways—Arthur is a white, Jewish, show tune–loving, Southern boy with ADHD who has never been kissed and dreams of attending Yale. Ben, on the other hand, is a Puerto Rican, Catholic, native New Yorker recovering from a recent breakup who is self-conscious about attending summer school and writes a novel in his spare time. However, the boys have one important thing in common—they’re both willing to believe in the universe’s bringing them together. Their alternating narration, chock-full of witty banter and pop-culture references, also delves into themes of identity and the complexities of relationships, both romantic and platonic. In particular, Arthur’s jealousy over Ben’s ex-boyfriend raises discussions of whether past relationships should be regretted or embraced. Central to the narrative are Arthur’s and Ben’s friends, who are diverse and richly drawn, and the boys’ parents, who encourage their relationship.

This joyful romance is both sweet and substantial.