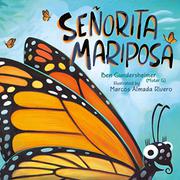 A bilingual love poem of admiration and respect for the millions of monarch butterflies that journey south to Mexico every year.

From a chrysalis on the title page, Señorita Mariposa invites readers to follow the monarch butterfly as it embarks on a journey spanning thousands of miles, “Over mountains capped with snow… / To the deserts down below.” In the same manner, the monarch butterfly exiting the chrysalis at the end of the book then invites readers to flip back to the beginning and restart the journey. Almada Rivero’s warm and friendly illustrations showcase the various people and animals the monarch encounters in its 3,000-mile journey, including a couple of brown-skinned children who welcome Señorita Mariposa to Mexico as the text reads, “Can’t believe how far you’ve come.” Gundersheimer’s recounting of the lepidoptera’s journey is told in a bilingual poem, English set in a serif type and Spanish set in sans-serif. Like the butterfly traveling south and north, the languages switch prominence, displaying in the larger font the principal—and rhyming—language in each spread. Although at times distracting, this technique is a valiant attempt to give equal importance to each language. Backmatter includes facts on the round trip the butterflies undertake, the “super generation” that makes the trek south, and a call to action to protect the monarchs as they slowly lose their habitats.

Uplifting and inspiring of further research.