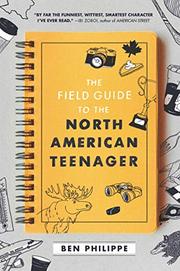 THE FIELD GUIDE TO THE NORTH AMERICAN TEENAGER

A teenage, not-so-lonely loner endures the wilds of high school in Austin, Texas.

Norris Kaplan, the protagonist of Philippe’s debut novel, is a hypersweaty, uber-snarky black, Haitian, French-Canadian pushing to survive life in his new school. His professor mom’s new tenure-track job transplants Norris mid–school year, and his biting wit and sarcasm are exposed through his cataloging of his new world in a field guide–style burn book. He’s greeted in his new life by an assortment of acquaintances, Liam, who is white and struggling with depression; Maddie, a self-sacrificing white cheerleader with a heart of gold; and Aarti, his Indian-American love interest who offers connection. Norris’ ego, fueled by his insecurities, often gets in the way of meaningful character development. The scenes showcasing his emotional growth are too brief and, despite foreshadowing, the climax falls flat because he still gets incredible personal access to people he’s hurt. A scene where Norris is confronted by his mother for getting drunk and belligerent with a white cop is diluted by his refusal or inability to grasp the severity of the situation and the resultant minor consequences. The humor is spot-on, as is the representation of the black diaspora; the opportunity for broader conversations about other topics is there, however, the uneven buildup of detailed, meaningful exchanges and the glibness of Norris’ voice detract.

Despite some missteps, this will appeal to readers who enjoy a fresh and realistic teen voice.