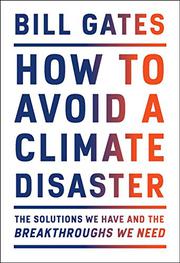 HOW TO AVOID A CLIMATE DISASTER

The Solutions We Have and the Breakthroughs We Need

A persuasive, optimistic strategy for reducing greenhouse emissions to zero by midcentury.

In his latest book, Gates makes a significant contribution to the rapidly growing shelf of books that not only acknowledge climate change, but also propose viable solutions; other examples include Eric Holthaus’ The Future Earth and David Attenborough’s A Life on Our Planet. Gates moves several steps further in a comprehensible, at times amusingly wonky, text that provides detailed plans. The author relates a compelling vision of what the potential devastation will look like, assessing the scale and range of expected damage, but he is more interested in clearly communicating the multitiered facets of his plan. While drawing on his expertise and instincts as a successful tech innovator, investor, and philanthropist, Gates relies on teams of experts in science, engineering, and public policy to flesh out the details. The author focuses on five major emissions-generating activities—making things, plugging in, growing things, getting around, and keeping cool and warm—and he breaks down his global plan to address the level of a given country’s financial capabilities. Gates applies his 2050 goal to developed, relatively wealthy countries, with others following as soon as possible after that date. Though we already have some of the tools necessary to implement his plan, many of them are not used widely enough, and Gates presses for increased investment in well-guided research and development and innovation in the efficiency of our electricity use. “We need to accomplish something gigantic we have never done before,” writes the author, “much faster than we have ever done anything similar,” which will require building “a consensus that doesn’t exist” and policy that will “push a transition that would not happen otherwise.” Though Gates doesn’t shy away from acknowledging the daunting challenges ahead, his narrative contains enough confidence—and hard science and economics—to convince many readers that his blueprint is one of the most viable yet.

A supremely authoritative and accessible plan for how we can avoid a climate catastrophe.