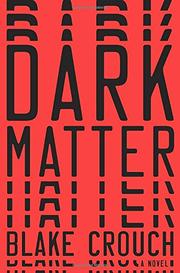 A man walks out of a bar and his life becomes a kaleidoscope of altered states in this science-fiction thriller.

Crouch opens on a family in a warm, resonant domestic moment with three well-developed characters. At home in Chicago’s Logan Square, Jason Dessen dices an onion while his wife, Daniela, sips wine and chats on the phone. Their son, Charlie, an appealing 15-year-old, sketches on a pad. Still, an undertone of regret hovers over the couple, a preoccupation with roads not taken, a theme the book will literally explore, in multifarious ways. To start, both Jason and Daniela abandoned careers that might have soared, Jason as a physicist, Daniela as an artist. When Charlie was born, he suffered a major illness. Jason was forced to abandon promising research to teach undergraduates at a small college. Daniela turned from having gallery shows to teaching private art lessons to middle school students. On this bracing October evening, Jason visits a local bar to pay homage to Ryan Holder, a former college roommate who just received a major award for his work in neuroscience, an honor that rankles Jason, who, Ryan says, gave up on his career. Smarting from the comment, Jason suffers “a sucker punch” as he heads home that leaves him “standing on the precipice.” From behind Jason, a man with a “ghost white” face, “red, pursed lips," and "horrifying eyes” points a gun at Jason and forces him to drive an SUV, following preset navigational directions. At their destination, the abductor forces Jason to strip naked, beats him, then leads him into a vast, abandoned power plant. Here, Jason meets men and women who insist they want to help him. Attempting to escape, Jason opens a door that leads him into a series of dark, strange, yet eerily familiar encounters that sometimes strain credibility, especially in the tale's final moments.

Suspenseful, frightening, and sometimes poignant—provided the reader has a generously willing suspension of disbelief.