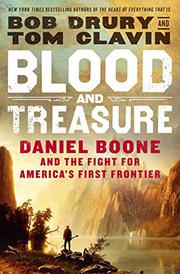 Daniel Boone and the Fight for America's First Frontier

Popular historians Drury and Clavin deliver a ripsnortin’ tale of the early frontier and its first and most powerful legend.

The authors open on a frightful note, depicting a 16-year-old son of Daniel Boone being tortured “on the frozen scree beneath the Cumberland Mountain’s shadow line,” a Shawnee warrior tearing his fingernails and toenails off before finally killing him. Undeterred, Boone led a party of settlers over the Cumberland Gap, made his way into Kentucky, and in time established a walled compound on the Kentucky River. The narrative seldom finds a moment of calm thereafter. As Drury and Clavin observe, the arrival of Whites across the Appalachians began “a slow-motion genocide” for many Native peoples, not least of them the Shawnee, Boone’s principal foe. Boone was unusual for many reasons, not least because he “respected, if not completely understood, the spirituality and philosophy that underpinned [the Natives’] culture” and “never underestimated their intelligence.” Boone’s arrival also figured in a complex series of conflicts that involved France, Britain, Indigenous peoples, and the newly founded U.S. Keeping his fellow settlers alive in the bargain landed Boone in more than one spot of trouble. He was held prisoner by the British, accused of loyalist sympathies by frontier revolutionaries, and, in the end, recognized as a true patriot whose actions kept the British from flanking the Continental Army in the South. A particularly exciting set piece is the authors’ account of a combined British/Canadian/Native siege of Boonesborough in 1778, with bad results for one loud-voiced spokesman for the besiegers: “The next time Pompey showed his face, Collins blew it into the Kentucky River.” The war on the frontier became bloodier still. Though not as comprehensive as John Mack Faragher’s 1992 biography Daniel Boone, this book offers a vivid account of Boone’s frontier years, one that may not be for the faint of heart.

A well-written, fast-paced account that neatly bridges the gap between historical fact and fiction.