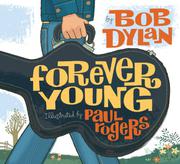 Rogers sets Dylan’s timeless lyric (composed, writes the renowned author, “in a minute”) to simply drawn and colored cartoon scenes strewn with references to iconic ’60s-era people and places, as well as Dylan songs and albums. The result is a keepsake of the period that will nonetheless speak to modern readers. The archetypal plot follows an eager lad who takes the guitar passed to him by a smiling busker outside Gerde’s Folk City, and at the end passes the instrument in turn to an even younger girl. In between, he sings in the park for the likes of Joan Baez, zooms down Highway 61 in a VW beetle and marches beneath antiwar signs with Martin Luther King Jr. and others. The illustrator provides a partial key at the end, along with the occasional musical recommendation. Modern songs don’t generally make the leap to this format successfully—Dylan’s own Man Gave Names to All the Animals (1999), illustrated by Scott Menchin, being a case in point—but here’s a rare exception. (Picture book. 6-8, Boomers)