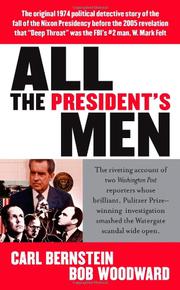 ALL THE PRESIDENT'S MEN

Bernstein and Woodward, the two Washington Post journalists who broke the Big Story, tell how they did it by old fashioned seat-of-the-pants reporting — in other words, lots of intuition and a thick stack of phone numbers. They've saved a few scoops for the occasion, the biggest being the name of their early inside source, the "sacrificial lamb" H**h Sl**n. But Washingtonians who talked will be most surprised by the admission that their rumored contacts in the FBI and elsewhere never existed; many who were telephoned for "confirmation" were revealing more than they realized. The real drama, and there's plenty of it, lies in the private-eye tactics employed by Bernstein and Woodward (they refer to themselves in the third person, strictly on a last name basis). The centerpiece of their own covert operation was an unnamed high government source they call Deep Throat, with whom Woodward arranged secret meetings by positioning the potted palm on his balcony and through codes scribbled in his morning newspaper. Woodward's wee hours meetings with Deep Throat in an underground parking garage are sheer cinema: we can just see Robert Redford (it has to be Robert Redford) watching warily for muggers and stubbing out endless cigarettes while Deep Throat spills the inside dope about the plumbers. Then too, they amass enough seamy detail to fascinate even the most avid Watergate wallower — what a drunken and abusive Mitchell threatened to do to Post publisher Katherine Graham's tit, and more on the Segretti connection — including the activities of a USC campus political group known as the Ratfuckers whose former members served as a recruiting pool for the Nixon White House. As the scandal goes public and out of their hands Bernstein and Woodward seem as stunned as the rest of us at where their search for the "head ratfucker" has led. You have to agree with what their City Editor Barry Sussman realized way back in the beginning — "We've never had a story like this. Just never."