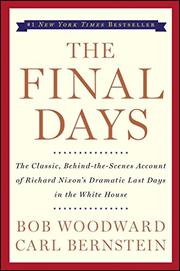 The calculated unveiling of the new Woodward and Bernstein bombshell—headlines in the daily press, excerpts in Newsweek—has maximized its exposure at the expense of the drama, even the limited "truth" of the book. Anyone who's been awake knows the worst: Kissinger's contempt for "our meatball President" and his siege with a kneeling, sobbing Nixon the night before resignation; Mrs. Nixon's estrangement (separate beds since '62) and the son-in-laws' fears of insanity or suicide; the wire-pulling of Alexander Haig, the waffling of James St. Clair, the bullishness of Ronald Ziegler. Here, however, the infinite indiscretions emerge in the course of events from the April 30, 1973 departure of Haldeman and Ehrlichman to the August 9, 1974 take-off of Nixon himself. For months all hands fight to keep Nixon in office and control the tapes. On July 24, '74 the Supreme Court rules for special prosecutor Jaworski, and Fred Buzhardt, listening at last, finds "the smoking pistol"—the Nixon-Haldeman confab on June 23, 1973, six days after Watergate—which, he and other aides demonstrate, Nixon listened to in May. In the two weeks following Nixon is nudged toward resignation—balks, wavers—and by the time the cat is bagged you wonder not that he eventually fell apart (to whatever extent he actually did) but that he held up so long. Which leaves one doubtful of how much of this dramatic narrtive—composed of direct quotes and desk-side detail—to credit, since none of it is substantiated in any assessable way. And given the putatively "complete" story, what is one to make of what's not there—any clear indication of whether or not Ford promised Nixon a pardon, the one disclosure that would have been in the public interest?